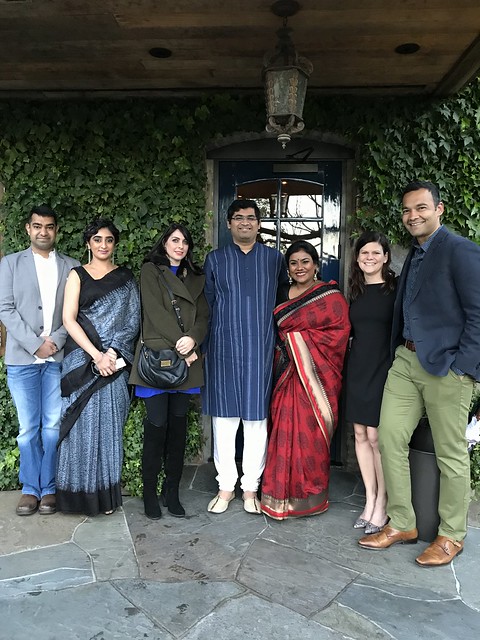 For foodies in the Bay Area, there is one fine dining place that we all have on our bucket list – The French Laundry. Nithya and I have had the pleasure of dining at Per Se and doing the French Laundry retrospective at Next, but we never managed to get reservations to the big daddy. However TFL moved to a ticket based reservation system last year and that allowed us to finally scored a dinner reservation for he birthday a few weeks ago. 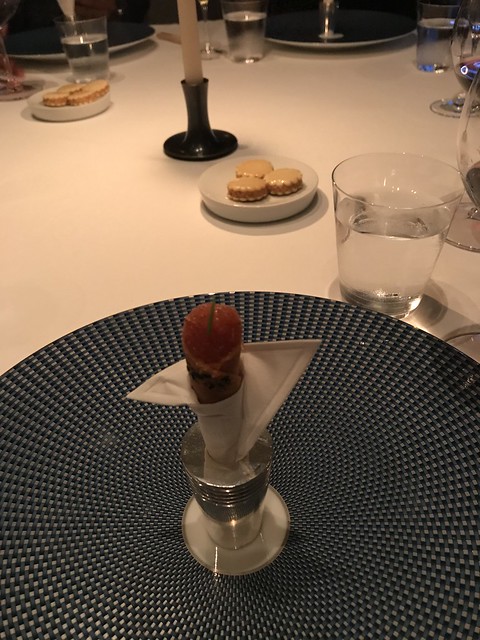 The first course was this cornet of tuna tartare. They usually serve this dish with Salmon tartare but this night it was tuna instead and just as delicious as before. 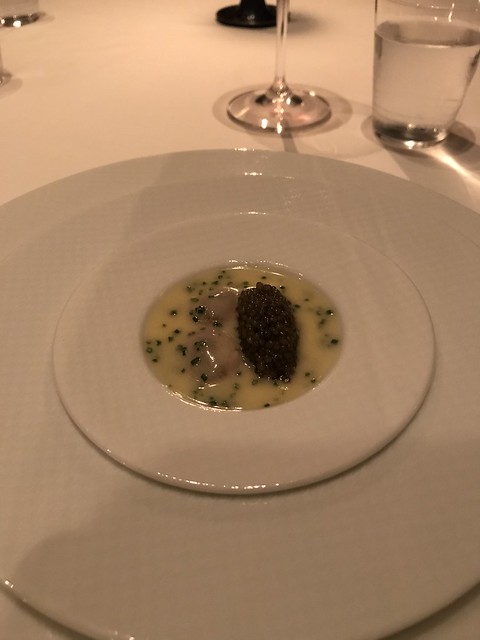 Next we got the signature Thomas Keller dish, “Oysters and Pearls”. It consists of poached oysters served with a tapioca sabayon and caviar. While it may not sound that interesting, it has an incredibly rich and creamy texture that works incredibly well with the caviar. They have been serving this dish at TFL for more that two decades and even on my third tasting I have to say that this was probably my highlight of the meal. 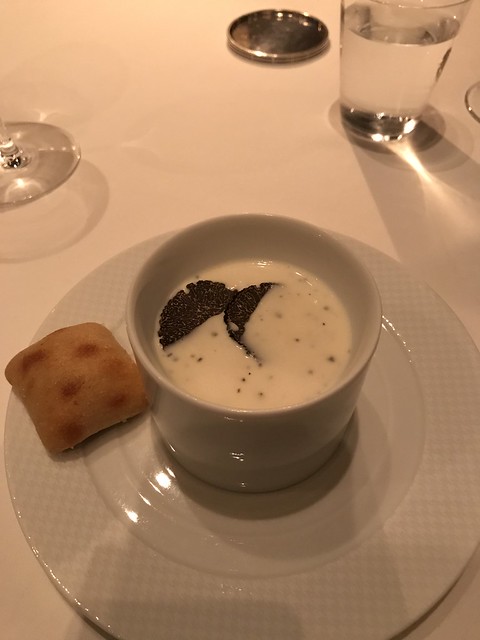 Next we celebrate truffle season by having a celery veloute with smoked duck and winter truffles. Like the tapioca sabayon before it, the veloute was another great example of perfect technique working with a relatively simple ingredient to give a great flavour. 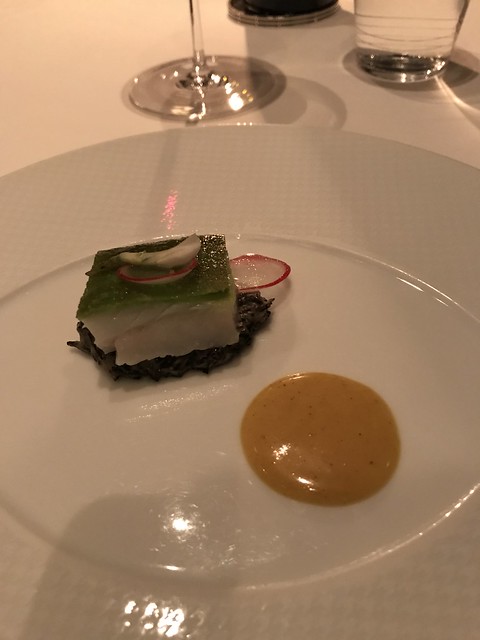 We move on the first fish course which was turbot over trumpet mushrooms with a curry banana emulsion. The turbot had in interestingly salty flavour that worked well with curry banana. Not a huge hit but definitely worth trying. 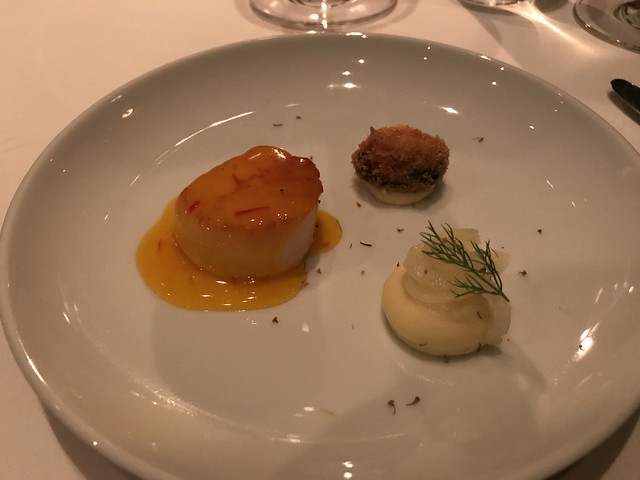 Then we come to the biggest fail of the meal. A scallop covered in saffron glaze served with a crispy mussel and potato puree. The scallop had a rubbery texture and the saffron glaze did not pair with it at all. To see a failure in both technique and creativity in the same dish was very disappointing. The crispy mussel and potato puree were great but this course was a definite flop and other diners agreed with me on this as well. 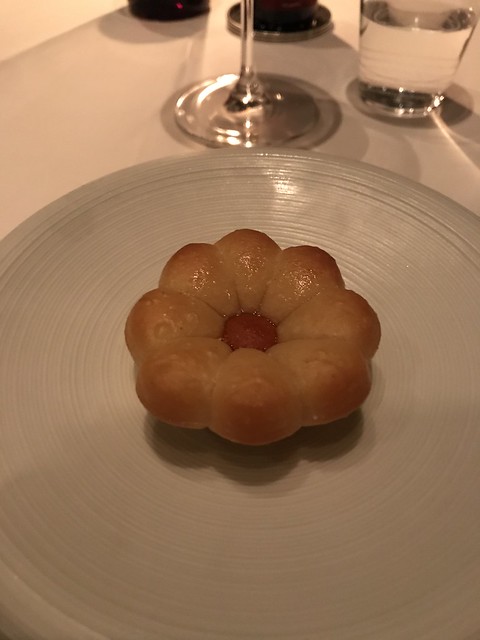 The bread and butter course was a “Parker House Roll” and was excellent as would be expected from the folks that run Bouchon backery. 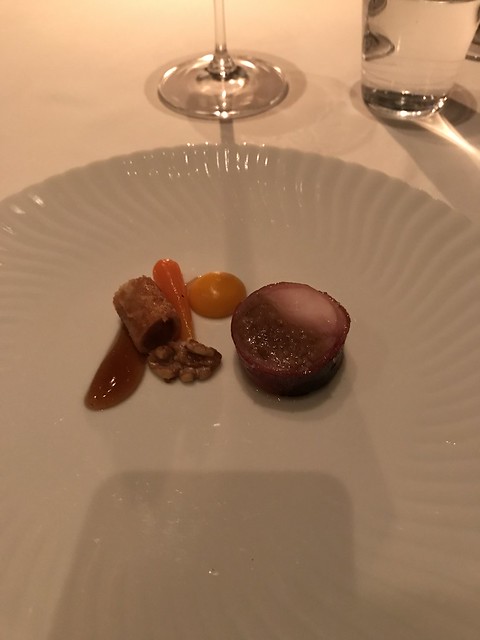 Fluffy was next on the menu – rabbit wrapped in bacon with dates carrots and walnuts. I’ve only had rabbit a handful of times and this once did taste quite good. 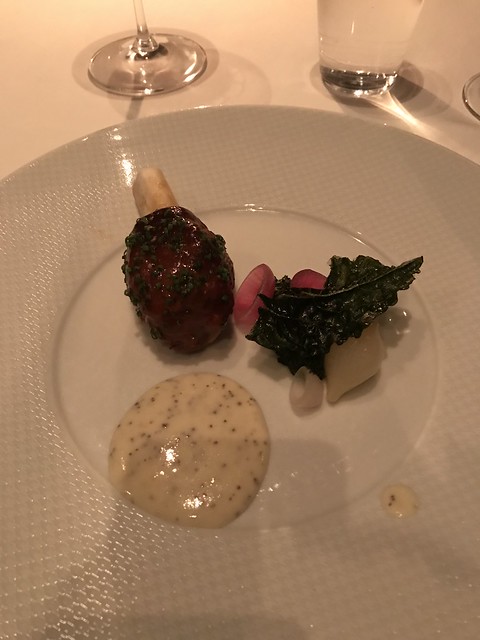 My favourite of the “new” dishes on the menu was this braised lamb shank with sauteed kale and mustard bechamel. The lamb texture was spectacular and the meat was falling off the bone. The kale and mustard offered a great contrast with bitterness and bite which made this my favourite non Oysters and Pearls dish. 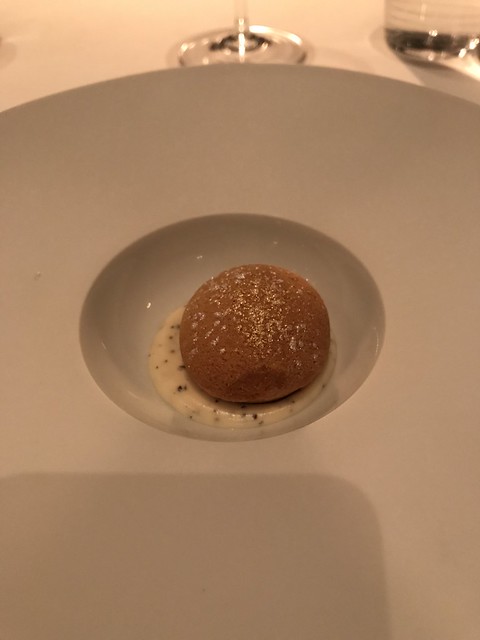 We finish the savoury courses with the cheese course of a gougere over a black truffle fondue – great way to end. 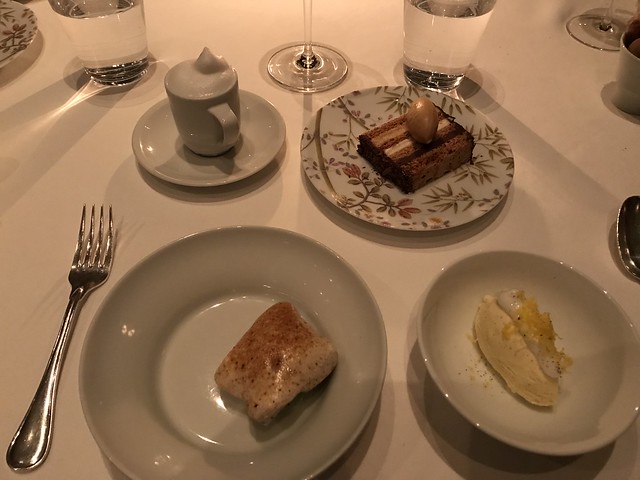 The finale was a round of desserts including coffee and donuts, Italian birthday cake and ice cream. Coffee and donuts were the standout (another 20+ year dish) but the rest were nothing to write home about.

All in all it was a decent meal but I have to say that it did not reach up to my expectations. The high notes of the meal (oysters/pearls, coffee/donuts, cornet) were all literally decades old and only the braised lamb shank came up to that level from the newer recipes. The scallop was a failure in both concept and execution and stood out even more since there were only 8 courses. I would expect that a restaurant considered to be one of the best in the world would have found more high points in the last 20 years and not depend on its greatest hits to save the meal.

All in all I have to say our meal at Per Se (album below) was better and that the French Laundry wasnt worth the wait. For the same or even less $$ I’d rather have a meal at Californios, Taj Campton, Commis or a variety of other Bay Area restaurants. 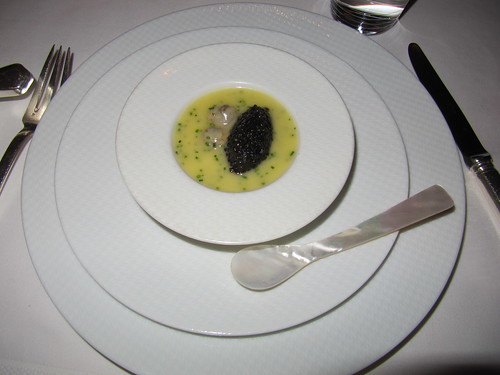