A few weeks ago Ford invited GGLC members to come down to Laguna Seca and drive the new Shelby Mustang GT350 as part of their North American track tour. I immediately signed up for it but having done a few of these manufacturer events I was not expecting much more beyond some power point presentations and a couple of lead follow laps – boy was I in for a surprise 🙂

I showed up at Laguna Seca with some friends in the afternoon and after signing the usual waivers we got down to the days program. It started with a large tent that contained several Ford performance cars including the Focus ST, Fiesta ST, Raptor pickup and a couple of the new GT350s as well. However the star for me was a preproduction version of the Focus RS that unfortunately was locked and so I was not able to get in to check out the interior. That said it is a spectacular looking car and to me much more interesting that the ordinary looking Golf R. 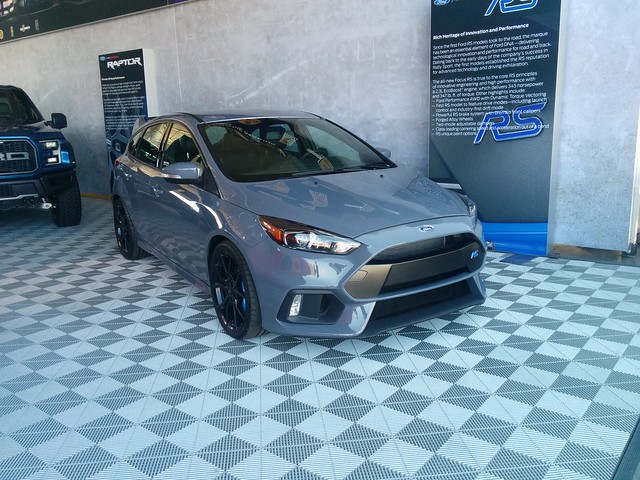 They also had a GT 350 on an angled side stand so you could look under the car see the many track and aero modification that have been made to the car. My favourite section though was the displays that had several of the bespoke components including the cutaway carbon fiber wheels that you could pick up. The wheels are incredibly light and in fact have foam filled voids in the spokes for additional weight savings. The external CF surfaces are painted black but the cutaway (pic below) showed the interior layers as well as the aluminium hub center and wheel bolt holes that are the metal contact areas on the rim. The wheels are so impressive that I was doing the math to see if they would fit the Evora until they mentioned that list price was $15k which put a damper on those plans. 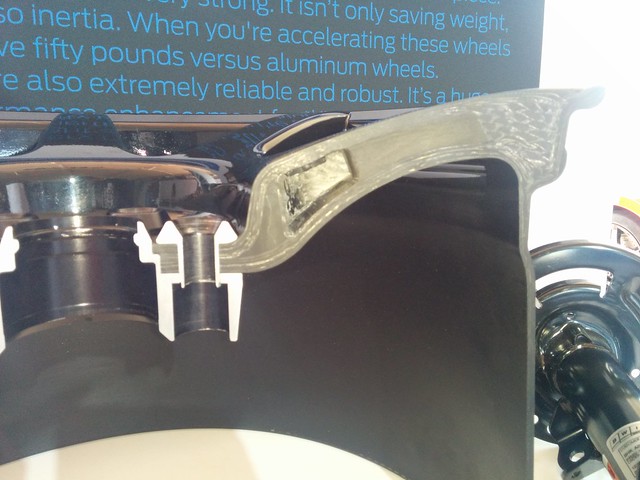 The GT350R includes a host of upgrades over the regular GT350 including better aero, carbon fiber wheels, ~150 lbs weight reduction and fantastically sticky Michelin Pilot Sport Cup 2 tires. Both cars come with the same flat plane crank 5.2L V8 producing 529 hp while reving all the way to 8250 rpm. Ford did a lot of work in making sure both cars were able to deal with heavy track workloads and specifically benchmarked the 350R against the 911 GT3 on track.

After some time time spent drooling over the static displays we were all fitted for helmets and HANS restraints before we lined up to drive the cars themselves. They had 6 cars available with 2 Rs while the rest were regular 350s with the track pack. I was able to count cars and lined myself such that I was able to drive the yellow GT-350R below. 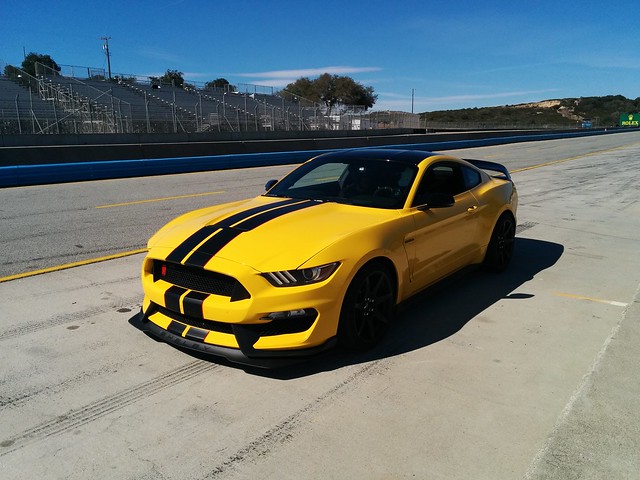 I was expecting a fairly mellow session as they said that they were going to ask novices to remain in 4th gear for the entire session. However when I got into the car the pro driver in the passenger seat asked me if I had any experience at Laguna and when I said yes told me I could go all out as long as I dont hit the cones they had setup for T7 and T9. Before he got a chance to change his mind I threw the car in gear and went out for my scheduled 3 laps in PP003. 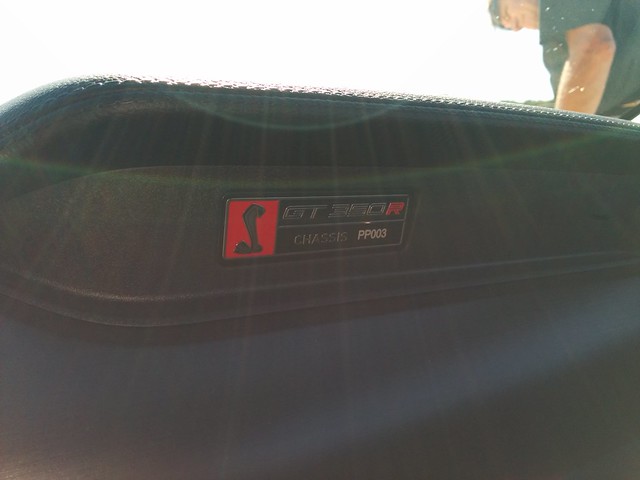 The first thing you notice about the car is the incredible amount of grip on offer. I was expecting the grunt and soundtrack from the amazing V8 but the tire grip was well above what I was expecting from an american muscle car. The car had very predictable handling and responded well to both wheel and throttle inputs. The traction control on my car happened to be off so I ended up getting pretty sideways coming out of T11 (1:45 mark in vid) but was able to easily control it and keep going without much loss in time. I did not really explore the brakes or the edge of traction but left feeling very impressed by the predictable handling and immense grip of the car.

A few weeks after the event Ford sent me a personalized video (at bottom of post) about my experience at the event as well as the above video of my first lap out of the pits. As any normal track guy would I looked at the video noticed the many flaws in the lap such as braking way early (esp T2 and T7), not maximizing the exit speed (first time out in someone else’s car), late throttle application in some turns and the wiggle coming out of T11. That said I was still curious about the laptime (no timing at the event) so I looked up the time codes at the start/finish and found that this very first lap out of the pits in a strange car while leaving plenty of margin was an incredible 1:40 lap.

OMFG!!!!! To put that laptime in perspective I took my Evora S to Laguna the same weekend and after 3 sessions I was only doing a 1:51. I have also ridden in a well driven Elise doing a 1:40 at Laguna and that car was absolutely at the limit. This Mustang was doing a 1:40 at only 8/10s which means a pro driver would probably be sub 1:35. Hell even I could get it down to a 1:38 or so if I had more time behind the wheel. Not only was the car incredibly fast but it did not feel rushed in any way – I was never concerned about the car or the speeds which shows what a stable platform it is to be able to put down such times with no drama whatsoever.

My hats of to the people at Ford for making a truly incredible track day car which flatters even the novice drivers and will be a true track day weapon in experienced hands. I especially like how they brought out fans of other marques to experience this car and it has really given me a whole new understanding of Ford Performance. While I am not in the market for a track car right now I am seriously considering adding the Ford Focus RS to the garage instead.