After a year long hiatus from doing my home tasting menus, I got the urge to a do a new one around the humble potato which led to last weekend Potato dinner. We have a total of 7 diners which did slow down the plating, but having done this several times I have gotten much better at managing my time and we were done with the 7 savory courses in just under 3.5 hours despite this meal including some fairly complex dishes as well as one multi-item course. 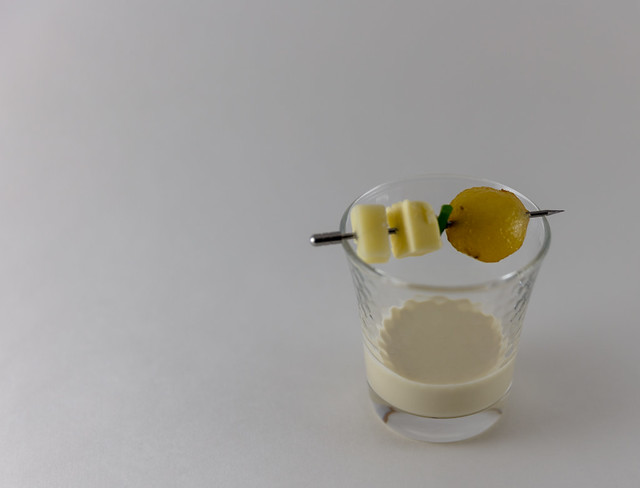 Hot Potato Cold Potato is a classic Alinea appetizer that has a hot ball of butter poached potato that is dropped into a cold potato soup made with truffle juice. The recipe itself is fairly straightforward (from the Alinea book) but the plating is quite complex with custom skewers being pushed through parrafin bowls that are hand made by the chefs. I replaced that with a simple glass and martini pick which did create some plating challenges. It was quite hard to keep small blocks of butter and parmesan from disintegrating on the picks thicker and in the end I think the parmesan block was a little too large. Additionally since I had to plate 7 skewers before serving the potato cooled a bit by the time I got them to the table and it was more of warm potato cold potato. There was a great truffle flavour from the soup and a textured mouth feel from the parmesan and butter. We didnt have as much of a temperature difference and that was down to me not practicing the dish before hand. 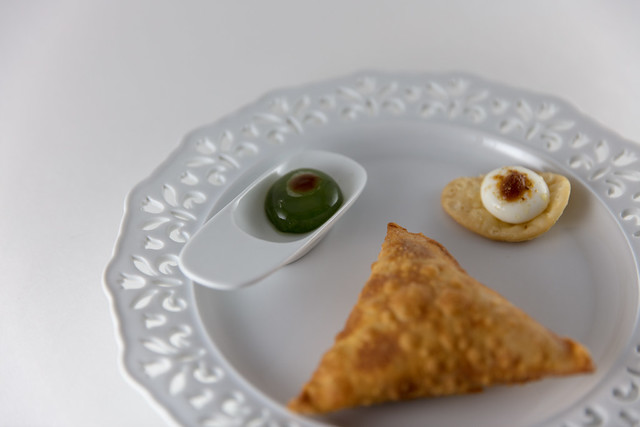 Potatoes are a key ingredient in most indian street food which led to this chaat course consisting of pani puri, dahi papdi and samosa. That said we intentionally made all three without any potatoes in them. The pani puri consisted of a spherified pani with a drop of tamarind sauce and some boodi for crunch and the dahi papdi had a sphere of yogurt on a regular papdi with tamarind sauce, mint chutney and chaat masala. 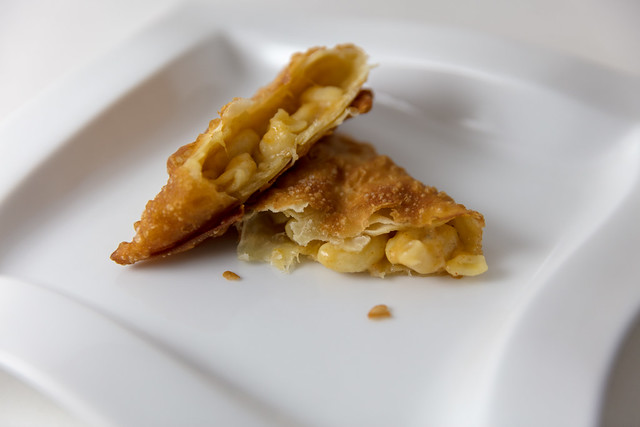 This first two items were things I had made before in my Spheres and Circle dinner so Nithya made the chaat course a trio by creating this mac and cheese samosa with indian spices in the mac n cheese to give flavours reminiscent of the traditional potato filling. This was quite a successful course and came together quite well for plating and theme. 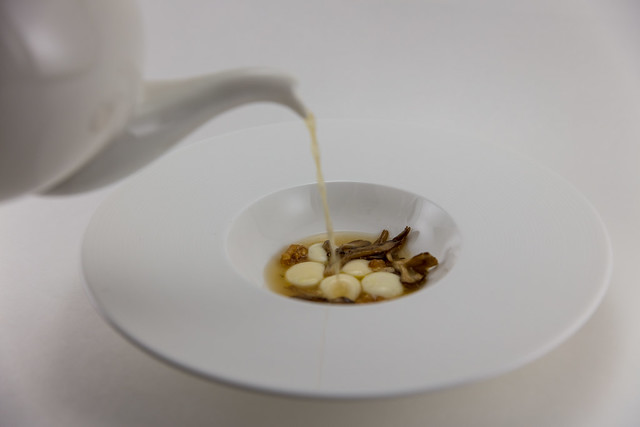 Next we continue the potato-less potato dish theme by making a liquid parmesan gnocchi in a clear mushroom broth. This was a direct implementation of the recipe from molecularrecipes.com and is one of the most complex dishes I have made to date. The work was definitely worth it as the liquid parmesan spheres were spectacular and bursting with the most incredible cheesy flavour. The cryofiltration created a wonderfully clear broth with earthy mushroom goodness that complemented the cheese and created a dish that I would be happy to eat at any Michelin starred restaurant. 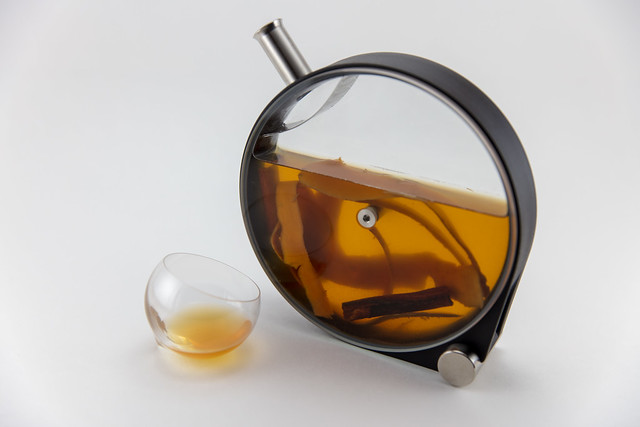 We then took a drinks break with a whiskey infused with sweet potato and cinnamon. Personally I am not much of a whiskey fan and while the alcohol flavour did change, I fould the whiskey taste to be overpowering. I’ll mark this one down as a fail and if I ever try it again will definitely dilute the raw alcohol with something else. 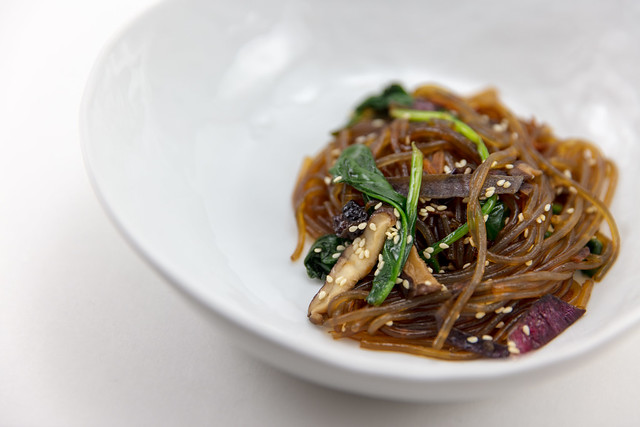 We get back to the food with a Japchae which is a korean dish made of sweet potato starch noodles. It is usually served as a side dish but I made a mushroom and toasted sesame version as a main course instead. I really liked the plating of the dark noodles in the white bowl with the veggies for a bit of colour. 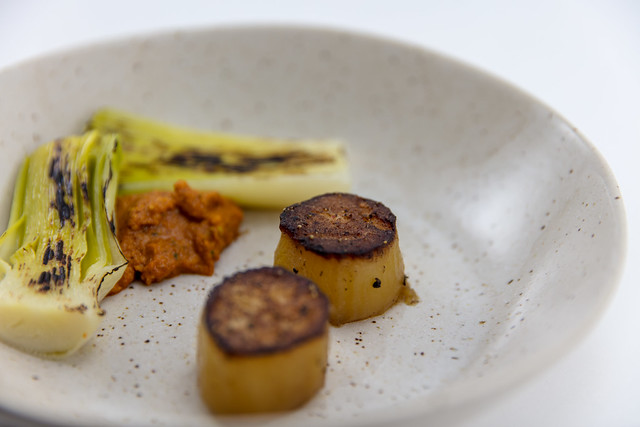 Next up was one my old favourites with a twist. I have made potatoes and leeks several times and over time had settled on the version with sous vide potatoes (roasted), sous vide leeks (torched) and romesco as the ideal version of the dish. But since this was going to be a potato dinner I wanted to do something to change up the potatoes and decided to go with fondant potatoes cooked to look like scallops instead. It is a classic european dish but there are several conflicting recipes out there and it took some trial and error for me to settle on this recipe that works quite well. 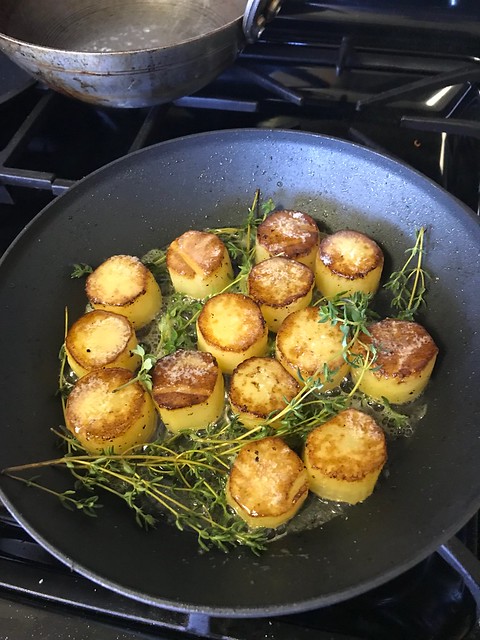 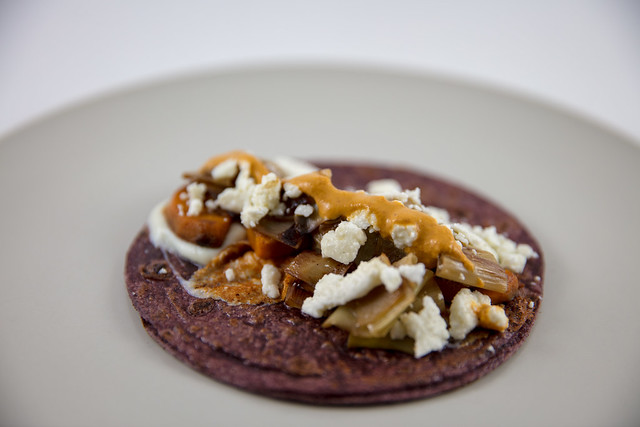 For the next course I went with a very different take on potatoes and leeks by making Wes Avila’s Sweet Potato Tacos (Amazon Prime Video). There are several different versions of this Guerilla Tacos recipe available online so I combined them up and put my own spin on things. 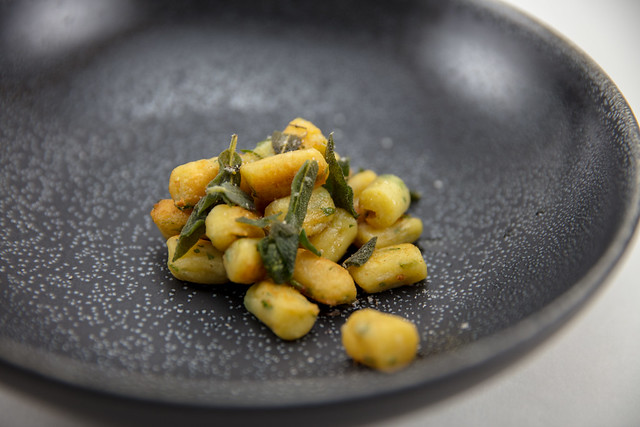 Our final savoury course was a parisienne gnocchi that we have made several times and continued the theme of normally potato based dish being made without potato. Nithy toasted them in butter with some crispy sage for a great flavour to end the mains on. 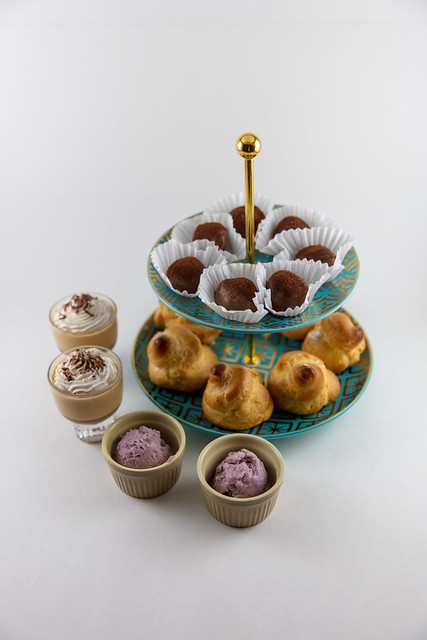 Nithya went all out on the desert course making 4 different items that the diners could pick and choose from. For the potato theme we had mashed potato truffles and purple potato ice cream, while the traditionalists got to have some cream puffs and salted caramel panna cotta.

And with that the meal was done!

I love your menus. Keep it up!

[…] those recipes which is when I realised that I hadn’t really made an truly new menu since my Potato Dinner of 2018. We got to talking about cookbooks at that meal and I remembered that I have both the […]