While planning my second home tasting meal I was investigating some molecular cocktails and really fell in love with a recipe for a deconstructed white russian with rice krispies. I loved the fact that diners have no idea what they were going to get and the fact that it was a drink but looks exactly like breakfast cereal. So with that as the starting point I decided to create the meal around the theme of “breakfast for dinner” and that I would skip the wine completely for more interesting alcohol. 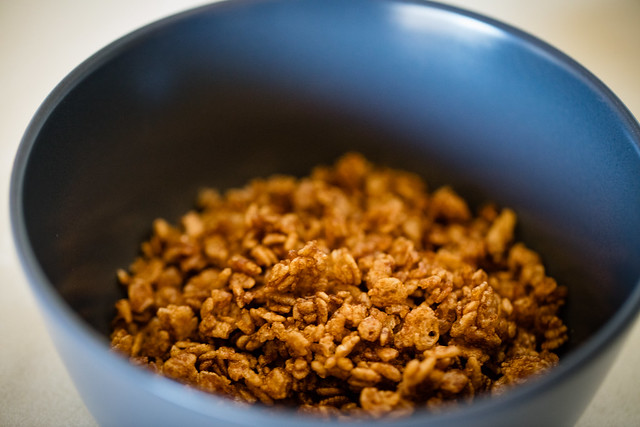 Made from the White Russian Krispies recipe, this dish uses kahlua infused rice krispies with a half and half plus vodka “milk” to make a white russian that looks exactly like breakfast cereal. This was the perfect way to start as it sets the tone for the entire meal by both being the personification of breakfast and telling dinners that things to come may not be what they seem. 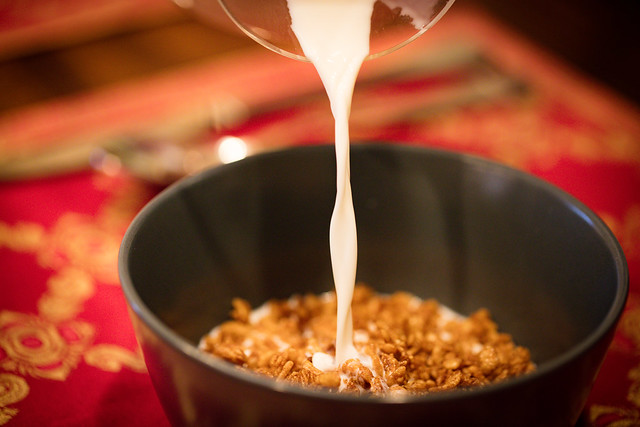 I made the krispies in the oven (170F) instead of a dehydrator and they were pretty straightforward to make. The one tip I will add is that they start to clump together when you put them in the oven and its worth the effort to break up the clumps by hand every time you add a layer of kahlua. You also want to pull them off the baking sheet as soon as they come out of the oven or else they will get soggy when they cool. The only other thing I will add is that the recipe seemed to be a little too strong on the vodka. That said I made it by mixing instead of shaking with ice which would have diluted the “milk” a little.

Pomme Rösti with Martini Gel
The next breakfast item was the chef steps recipe for Pomme Rosti which is a swiss dish made with shredded potatoes that looks very similar to hashbrowns. The main difference is that it is primarily cooked in butter and is both sauteed and baked to get the crust. This was served with a martini gel and olives. 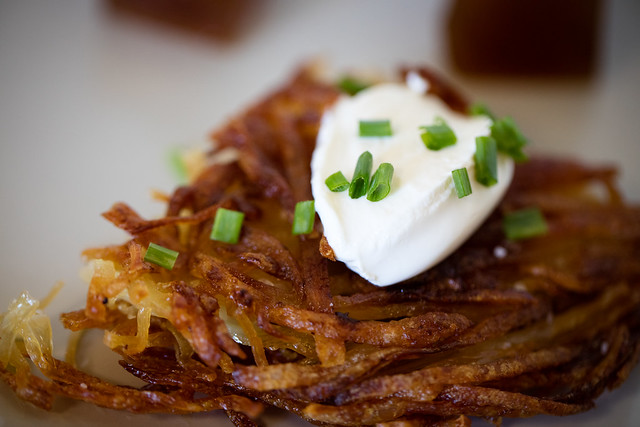 The pomme rosti recipe I feel had just too much butter in it to brown up correctly. After 30 min in the over I was getting no browning at the top or bottom so I dumped out some of the liquid butter and then sauteed it on the pan at high till it crisped up before putting it in the oven to firm up the interior. I then flipped and sauteed it on the pan again to brown the other side before finishing in the oven. One other tip is to put some foil on the lowest rack of the oven before doing the baking rack crisp or it will drip butter which will burn on the oven floor. 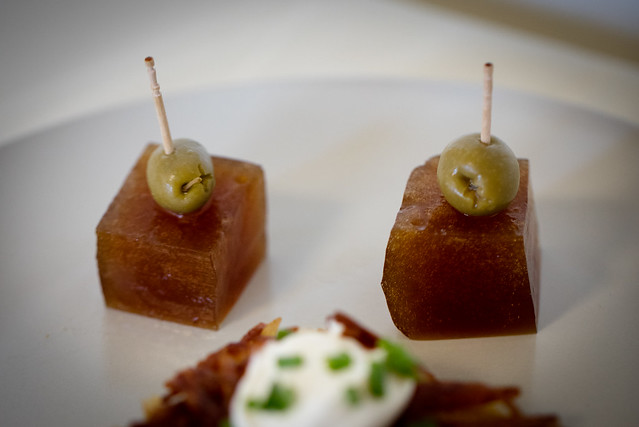 The martini gel was a straightforward agar agar (0.9%) and locust bean gum (0.1%) gel that I hydrated directly in vermouth. Since the hydration requires boiling the base for a couple of minutes I started with the same amount of vermouth as the gin I was adding as some of the alcohol would get lost and bring it back to the usual 2:1 martini ratio. After hydration I just added the gin to the vermouth and poured it into a dish to set. The end product tasted exactly like a martini but the gel was hard to actually pick up and eat as it would not stick to a toothpick. Next time I will put a toothpick with an olive inside each pocket of an ice cube tray and set the gel in the tray. That way the olive will be hidden from view and will also add extra grip to allow the toothpick to pick up the gel.

Chorizo French Toast and Scrambled Eggs with Gin N Tonic
This course was a combination of recipes from two great modernist chefs. The Chorizo French Toast by Nathan Myhrvold and the incredible Scrambled Eggs from Heston Blumenthal. Plus since this course would take a while to get ready, I served it with some colour changing gin and tonic to keep the guests occupied while we cooked. 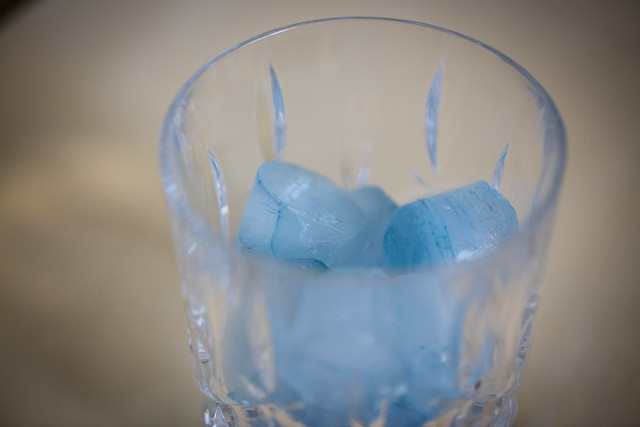 The gin and tonic was a standard GnT with 2:1 Fever Tree tonic and Beefeater gin along with the juice of 1 lime (across 4 drinks). The colour changing aspect comes from the blue ice that was made from B’lure flower extract. As the ice melts, the blure extract comes into contact with the acid from the lime juice and starts turning the drink pink. The clear drink should be poured into the glass in front of the guests so they can see the colour change happening. In my case the drink tasted great but there wasn’t a dramatic colour change. I attribute it to not having enough acid (lime) in the drink and also having the drink ingredients pre chilled which meant that the drink did not melt enough ice to release the B’lure. 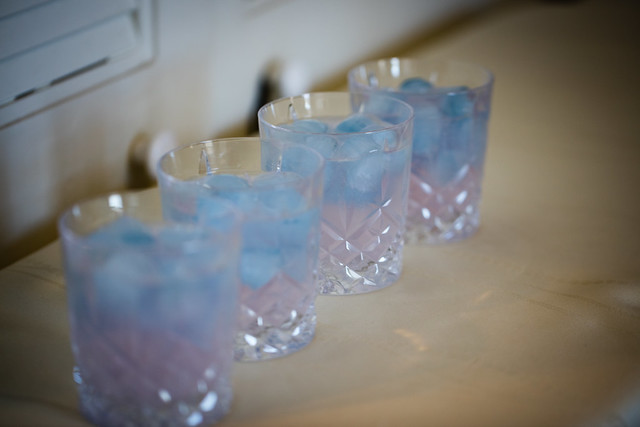 The chorizo french toast exactly followed the recipe from modernist cuisine without the quail eggs on top. I did find that it took closer to 15 min to get the toast up to the 80C internal temp that they asked for. The scrambled eggs again were exactly following the Blumenthal recipe. These eggs are probably my favourite sous vide recipe and I have made them several times at home. The two changes I did make are shredding the eggs a little with a fork after they are done and adding sherry vinegar as the topping instead of brown butter. 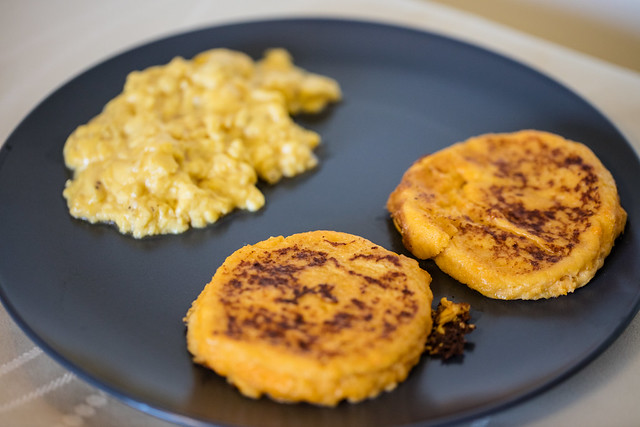 This was my favourite course of the meal as the french toast has a wonderful chorizo flavour and the eggs have an amazing fluffy texture. The only trick is to getting them all done at the same time so all the food is hot when you serve. I would bias towards getting the french toast done first and keeping it warm in the oven till the eggs are done as the scramble is cooked at 75C and cool down very fast.

Mango Bellini
This is an amuse bouche that I have been working on for quite a while. The idea is to have something that looks like an egg on the spoon but then tastes like a cocktail in your mouth. The white is made of gelled white wine (1% agar plus a drop of icing colour) and the yolk is straight mango puree. The original idea was to use one of the mango spheres from my last meal as the yolk but since the gel barrier prevents the flavour from hitting your mount I switched to regular mango puree instead. The trick with this one is to put some unflavoured pop rocks under the white wine and then serving immediately so that when the guests put it in their mouth the pop rocks will explode giving the feel of bubbles from champagne. 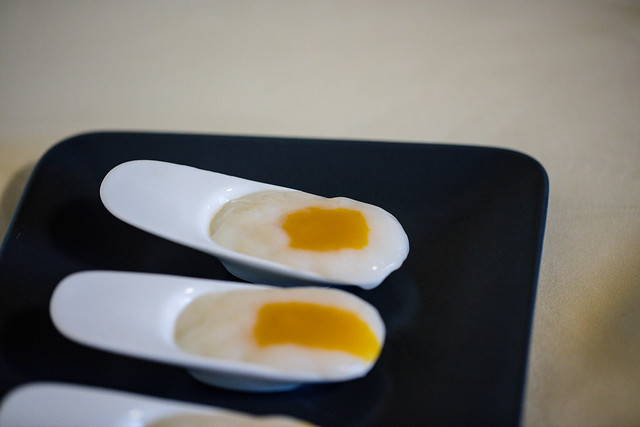 As you can see from the pictures I am still working on getting the appearance of the yolk to be spherical and have tried making them with both spoons and syringes so far. If folks have any other ideas I am all ears.

Double Surprise Grilled Cheese with Spherified Bloody Mary
This unfortunately was the only failed dish of the meal. The idea was to make the double surprise grilled cheese which you cut open to release a gooey egg yolk but unfortunately all the sous vide eggs broke when we flipped the grilled cheese. While they did all taste great we didnt get much of a surprise from the dish 🙂 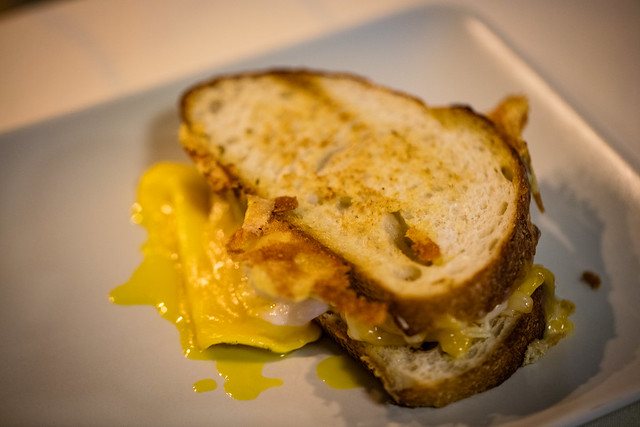 As a pairing for this one I served some spherified Bloody Marys that I whipped up. I started with a regular bloody mark made with store bought bloody mary mix and added 2% calcium lactate and 0.25% xantham gum using an immersion blender. I then froze the mix insilicone bottom ice trays and spherified them in a 0.5% sodium alginate solution. I found that 20 sec is about the right time in the alginate as 30+ seconds leaves a thick skin that still be felt after the spheres burst. The spheres can be prepared before hand and stay quite nicely in an olive oil bath. 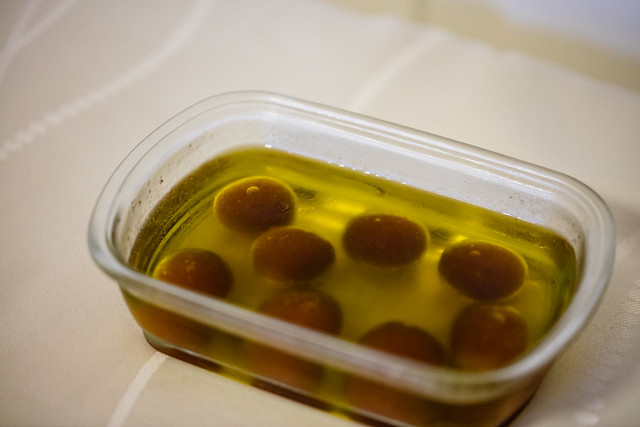 Mojito Sorbet
This was the simplest and most delightful dish of the whole meal. The idea is to serve it as a regular dessert and not tell the diners beforehand that it is actually a cocktail. The cold sorbet along with the strong mint flavour was super refreshing and something I will definitely do more often in summer. The fact that it only takes about 15 minutes of active work to make is a definite plus. 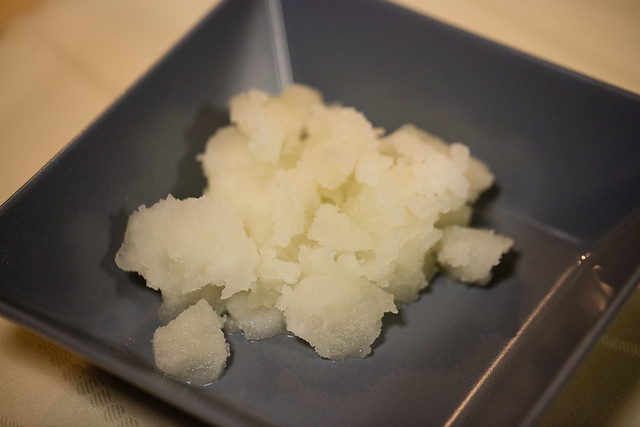 I followed this wonderful recipe and it came out perfectly with no tweaking needed. My only change for next time will be to pre-make the syrup beforehand and just drop it in the ice cream maker 20 min before serving time. The texture of the sorbet is much better when fresh compared to after freezing. I did try keeping it outside for 15 minutes before serving but as you can see it still is very flaky and frozen compared to the smooth texture it has coming out of the ice cream machine. 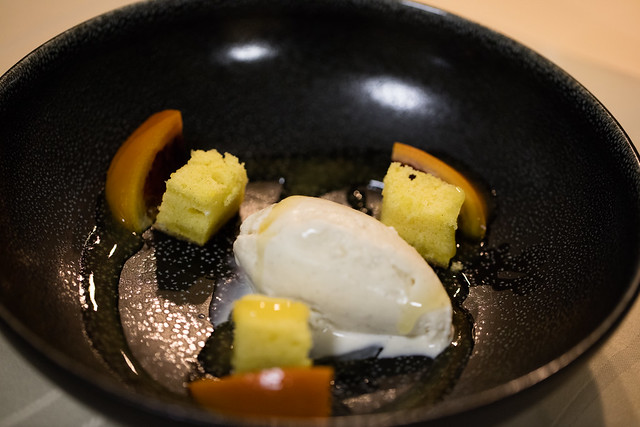 This last dish was a redo of the orange creamsicle that Nithya made at the last tasting meal. I still think it is too much work for a simple dish but I’m happy to keep eating it as long as she keeps making it 😉

Conclusion
This was a much shorter meal but the addition of the alcohol meant we did make a total of 11 different items. I liked the idea of a theme for the entire meal and I now realise just how difficult it is to weave a theme in like this. I will definitely be trying something like this again and I have a couple of ideas for new cocktails that I need to perfect before the next meal.

2 thoughts on “Breakfast for Dinner”