Last weekend Nithya and I made our first really complex dinner at home. It was a 10 course vegetarian tasting menu for 6 and it defintely gave me a much greater appreciation for what chefs have to deal with in getting a multi course menu on the plate at the right time. The following post is a quick recap of the various dishes we made: 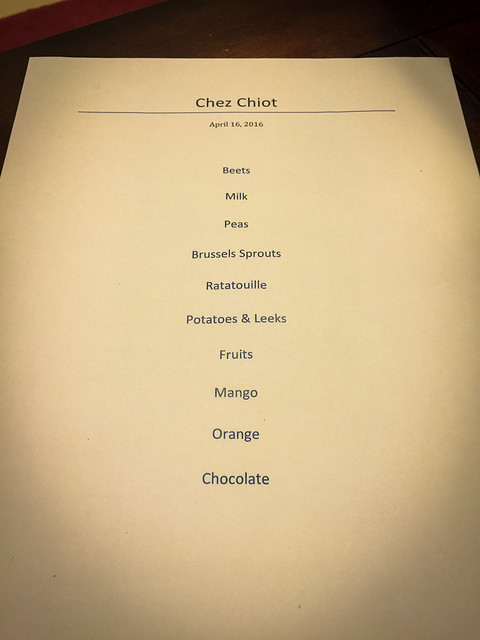 Beets
Our first attempt at spherification pretty much followed the Beet Sphere and Goat Cheese recipe with the only difference being the use of straight calcium lactate instead of calcium lactate gluconate in the beet juice. I also used sodium alginate and let it hydrate overnight instead of using the magic sphere mixture. Everyone seemed to like it but I personally felt that there was a bit of an chemically aftertaste from the beets. Having never had beet juice before it may just be what the juice is like or it may have been a mental block since calcium lactate is supposed to have a stronger flavour than the gluconate. 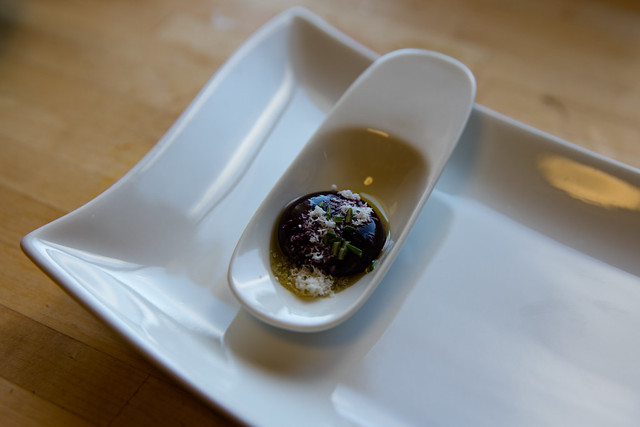 For tips and tricks I would recommend using a store bought beet juice instead of making it at home. It is quite painful to make without a juicer and just did not have the payoff IMHO. Also getting the bubbles out of the blended juice mixture is difficult and can result in the frozen beet sphere fragmenting as you pull them out of the mold. It’s better to leave the mold in the freezer and pull them out one at a time to spherify. The good part is that even if they have the occasion bubble or fragmentation in them, the spheres still come out great and while it sounds like a complex process in reality its actually quite simple to do.

Milk
The second course was Savory Ice Cream Salad that Nithya made. The ice cream is a bit on the salty side and it does surprise you at the first bite when you find something frozen but not sweet. 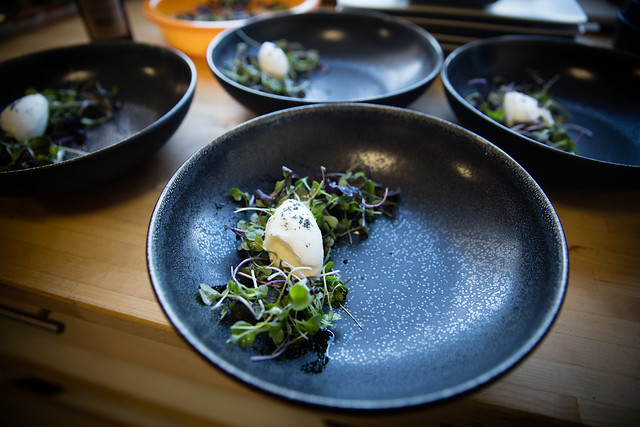 The hardest part in this one was actually finding the microgreens to serve it with as they were not available from any of the local stores – Nithya eventually found them at Draegers in Menlo Park. As you would expect the ice cream was made beforehand and all you have to do is plate before serving. For serving the question was how to actually eat the dish – people used a combination of spoons and forks with no clear winner as to what the best way way. The really cool serving bowl is the Jars Tourron low bowl that Nithya picked up at Crate & Barrel. 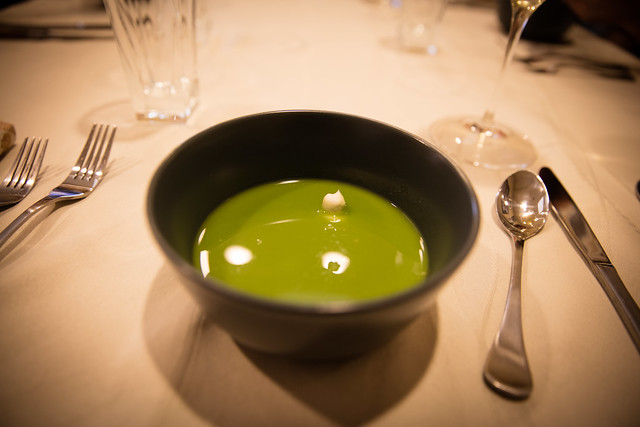 This was the simplest and easiest dish to make – a chilled pea soup with ricotta. It is even cooked in the microwave and the only item you need is a blender (I used an immersion) to blend the puree and the ricotta. Great flavour, can be prepared in advance and works wonders on a hot day. Extra points for being probably the best taste to effort ratio of the meal 🙂

Brussels Sprouts
This course was interesting because I knew I wanted to do the Momofuku Brussels Sprouts but also knew that it would need some sort of accompaniment to make it a course instead of a side. My first thought was to use sous vide spicy paneer steak but Nithya nixed that one as not having a matching flavour profile. In the end we settled on the Rich as F*¢k Biscuits as something to add some carbs and volume to the meal. 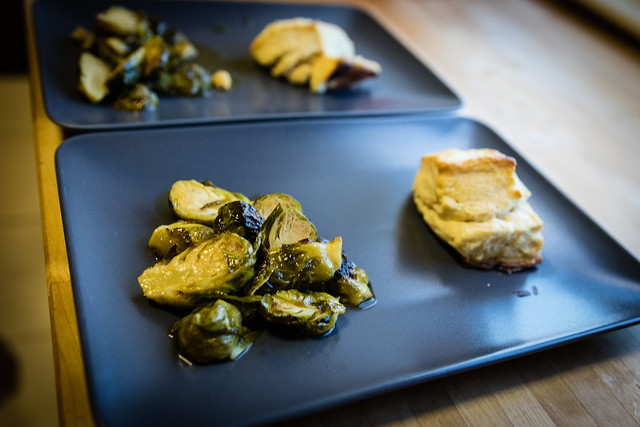 As the first hot course I had to get the timing right and this is where the sous vide machine really helps out. I dropped the brussels sprouts into the water just before serving course 2 and basically let it sit there until ~5 min before serving. The biscuit dough was made a few days earlier and was sitting pre-cut in the freezer. I put the dough into the preheated over at 400F as we served course 3 and waited the 12-15 minutes it takes for them to complete. When I pulled the biscuits out of the oven I switched it to broil and put the sprouts in the top shelf for finishing. After 5 minutes the sprouts were nicely browned and I pulled them out for mixing and plating while using the off but still warm oven to keep the biscuits warm. Once the sprouts were plated all I had to do was add a biscuit to each plate and serve. 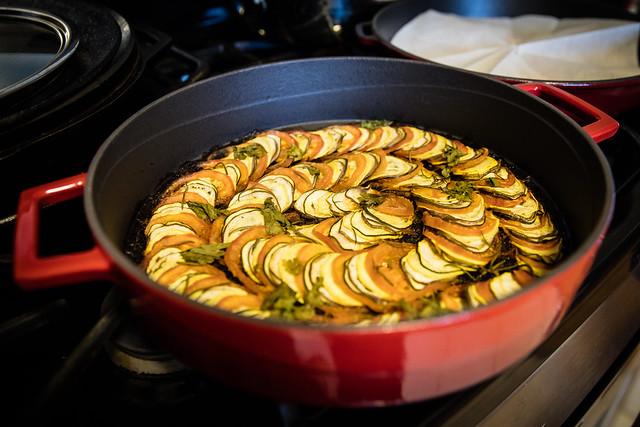 The next dish was the Pixar Ratatoile which is the only one I think looks better pre-serving (above) than it does on the plate (below). 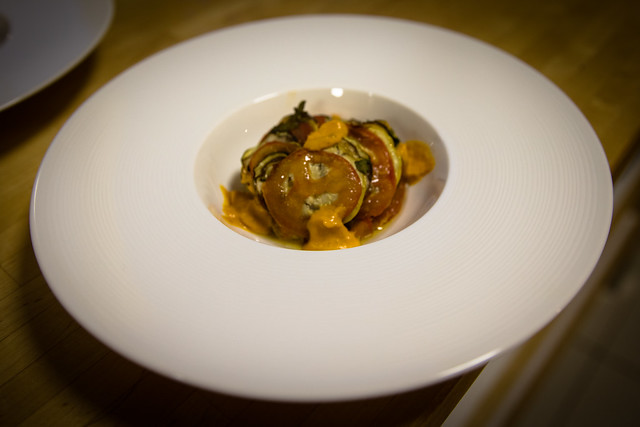 I made a test version of this the weekend before and was not too happy with the taste of the sauce which felt bland and was very brown in colour. I then realised that this was due to the eggplant scraps in the sauce and dropped them for this attempt – just red peppers, onion, garlic and tomato skins. This second attempt looked and tasted better but for the amount of effort it takes to do the initial prep I doubt if I will make this again. Also in order to get the serving time and temp right I cooked this for 90 minutes before people arrived and then left it sitting in the cast iron dishes for the first half of the meal. I then set the oven to 300 once I took the biscuits from the previous course out and stuck the ratatoulle pans back in to warm them up.

Potatoes & Leeks
This is one of my regular go-to vegetarian sous vide dishes. This time I deviated from the original recipe by doing only potatoes, leeks and romesco. Having done this several times before I feel that the beans and broth dont add enough while making the dish harder to both plate and consume. The picture below is from one of my previous attempts and not from the dinner itself as we forgot to take a picture while serving. A shoutout to Nithya for making the romesco from scratch – it is a significant step above store bought stuff. 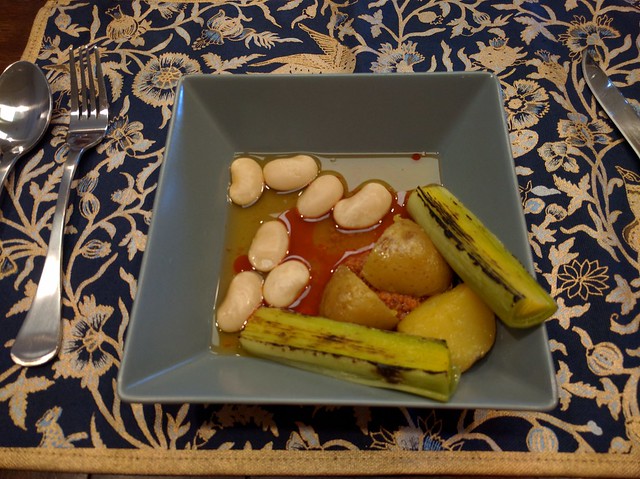 In order avoid timing issues while serving I precooked the stuff and stored the in the fridge. I then put them in a 70C bath while serving the previous course so they were warmed up for the finishing and plating. I also deviate from the recipe by using a Searzall to finish the leeks as it reduces the time on the stove and is easier to clean.
Pairing: Koloa Kaua`i Dark Rum & Coke
This was a bit of an ad hoc pairing as the diners saw the Koloa rum on the shelf and wanted to give it a try. My original plan was to open a Seghesio Defiant.

Fruits
The fizzy fruits were another thing that we forgot to take a picture of. I used the dry ice in a cooler method and was able to carbonate grapes, blackberries, oranges and watermelon slices. I felt that the grapes turned out the best though different folks liked the blackberries and oranges as well. The watermelon did have some carbonation in them but unfortunately were too frozen in parts to enjoy them properly. FYI you can buy 10 lbs of dry ice for $10 from SF Ice.

Mango
This was a completely new dish that I created for the dinner. Since I was going to have the spherification bath prepped for the beets I wanted to try something else as well and decided to make mango puree spheres. This whole dish came around from the idea of the sphere looking like an egg yolk and the original plan was to make the yolk and serve it over a blue cheese dip of sorts to make it look like a fried egg. In the end however I decided to do only the mango sphere and really like how they turned out from both a taste and appearance perspective. 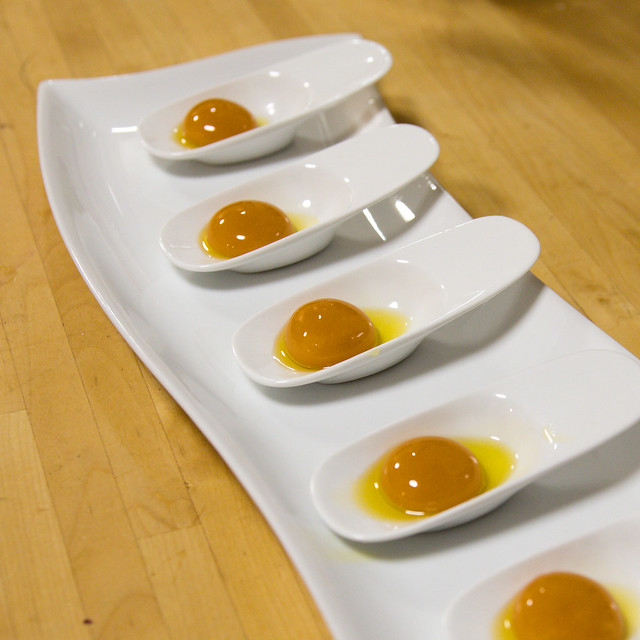 The recipe consisted of 300g of store bought mango puree blended with 4g of calcium lactate. Because the puree was quite thick to begin with I did not add any xantham gum as used in the beet sphere recipe. The puree was a bit too sweet and I added some smoked paprika powder to balance out the sweetness and give it a very light kick. I did try adding chipotle pepper powder as well but found that adding enough to change the taste would also dull the colour which I did not like. The smoked paprika on the other hand added some redness to the puree which made it look more orange and yolklike. After the blending I let it sit overnight in the refrigerator to remove the bubbles and used the same mold and reverse spherification technique like the beets.

A+ dish – will definitely do this again.

Orange
I then handed over to Nithya for the dessert courses and she started out with the fantastic Orange Creamsicle dish. This was a very complex dish that required making vanilla ice cream, orange gel, olive oil cake and candied blood orange. Excellent flavour profile especially of the ice cream with the gel and cake. 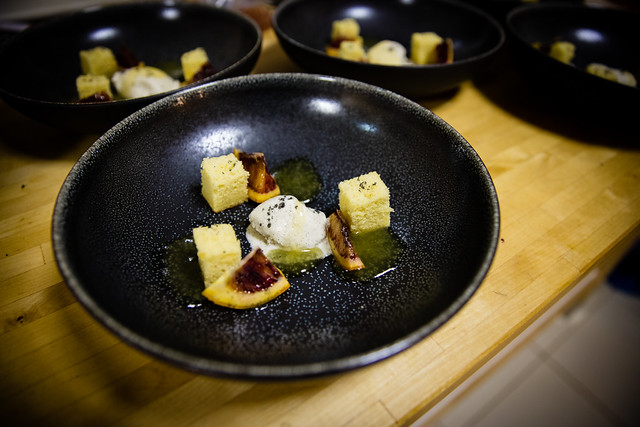 The vanilla ice cream had a very pleasing texture due to the various gum additives and had a mouthfeel very similar to store bought ice cream. The candied blood orange recipe uses a vacuum sealer repeatedly to infuse the simple syrup but we did it using just water displacement method. 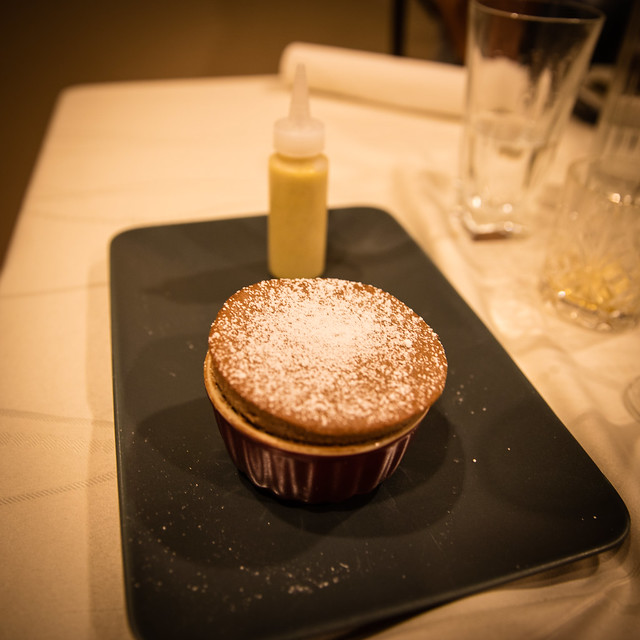 1 thought on “10 course tasting at home”