Late last year Nithya and I decided to start looking for a more fun daily driver to replace our Ford Flex Ecoboost which had served us faithfully for ~5 years. Our only requirements were that it be fun, faster than the flex and be able to haul the dogs around as well. My initial thought was to look at AMG Wagons and I even bid on one at Bring a Trailer which I missed out on by just $1k. Since they are relatively rare and hard to find I decided to expand the search and look for other fun wagons and sedans.

Regular readers of this blog might remember that I had a particularly shitty experience ordering a Dodge Charger Hellcat when they first came out and I had pretty much decided I would never look at Dodge product again. I was investigating used Hellcats when I found that there were some amazing deals available on new Charger Hellcats for both purchase and lease. The lure of 700hp was strong enough that we decided that the wagon wasnt a hard requirement and we could always put the puppies in the back seat. I started looking seriously in January and by the end of the month I was able to find a new 2016 Charger Hellcat in B5 Blue with exactly my options, delivered to CA for almost $9k under sticker. 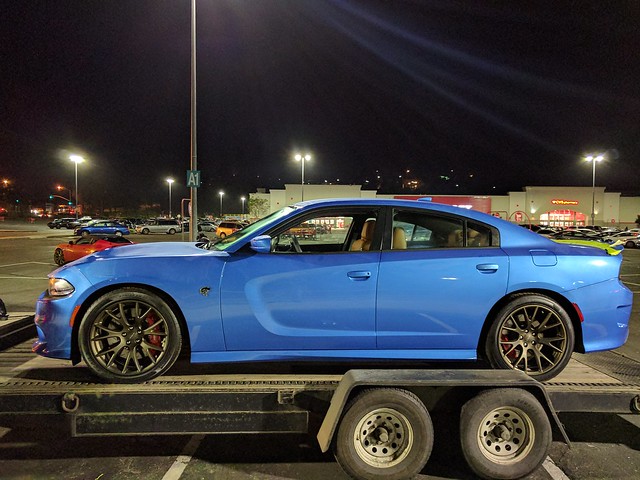 I have now had the car for 6 months (~8k miles) and I thought it’s time to write a real owners long term review rather than the usual journalists thoughts from a week with the car. I am mainly going to focus on the things I like and dislike about the car rather than an overall experience review.

Engine: As you would expect in the 700 hp car named after its engine, the driving experience is dominated by said engine. The Hellcat motor is a true gem – it has power and torque available all throughout the rev range and is never bogged down regardless of the speed, gear or load on the car. It makes a wonderful sound and is surprisingly rev happy for such a big block (6.2L) V8. That said, the engine is also remarkably docile when you are not on it. It will happily spend all day sitting in traffic without overheating and will still be ready to go the second you hit the gas. If you drive it conservatively you would never realize that you have the power to spin the wheels in the first three gears at least. 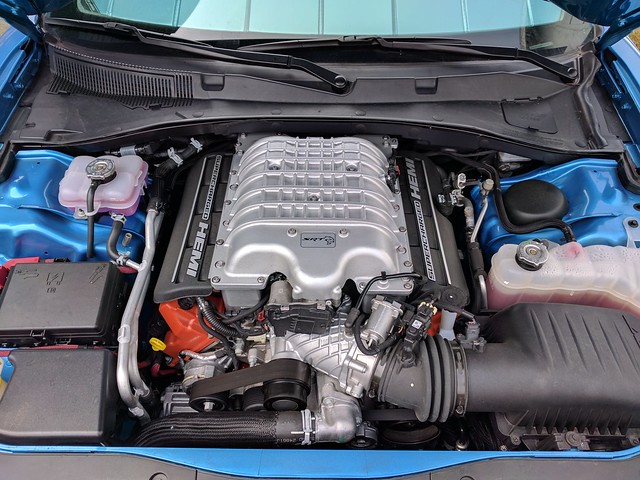 Acceleration:One of my favourite moments in this car was on day 2 of ownership when we were commuting down to work in it. I was stopped in the leftmost regular lane on CA-85N waiting for a gap in traffic to merge in to the carpool lane. When I finally saw a gap I gave it some generous throttle so I could merge in time and get up to speed before the next car came along. The Hellcat just sat there spinning its tires despite having the traction control on. I had to lift off the gas for a bit so the tires could get some traction and rocket us down the road. 🙂

The acceleration of the Hellcat has to be experienced to be truly understood. Off the line it pretty snappy but is severely traction limited so it doesnt feel any faster that my old S2K Seven which had the exact same power to weight ratio. Where it really shines is in-gear acceleration at higher speeds, it accelerates from 60 like the Elise and Evora pull from a standstill. You give it the slightest touch of the throttle even at triple digit speeds and it effortlessly accelerates. Its been an eyeopening experience for me to drive something with this much power and I finally understand the allure of AMGs, M5s and the like.

Gearbox: The Hellcat comes with a beefed up version of the ZF 8-speed automatic gearbox that is used by everyone from Jaguar to Rolls Royce. Having spent some time with it I finally understand why everyone has been singing its praises. It is frankly the best gearbox I have ever driven with smooth, fast shifts that always feel like you are in the right gear. In the street settings I generally cant tell when it is changing gears which is quite impressive. In track mode the shifts are even faster and have a significant jerk when you pull the paddle. I personally find track mode to be too jarring and prefer to leave the car in street mode which is plenty fast and much more comfortable. Some day I’d like to run back to back track sessions with the gearbox in different modes to see if the “faster” shifts actually result in a better lap time.

Mileage: This is not something I cared about when I bought the care but I have been pleasantly surprised by just how good the mileage is if you dont get too aggressive with the throttle. I am averaging a little over 19 mpg over 8k miles which is a remarkable number for something with this much power. I usually get between 20-22 mpg on the highway and even got a personal best of 24 mpg on one drive to work. 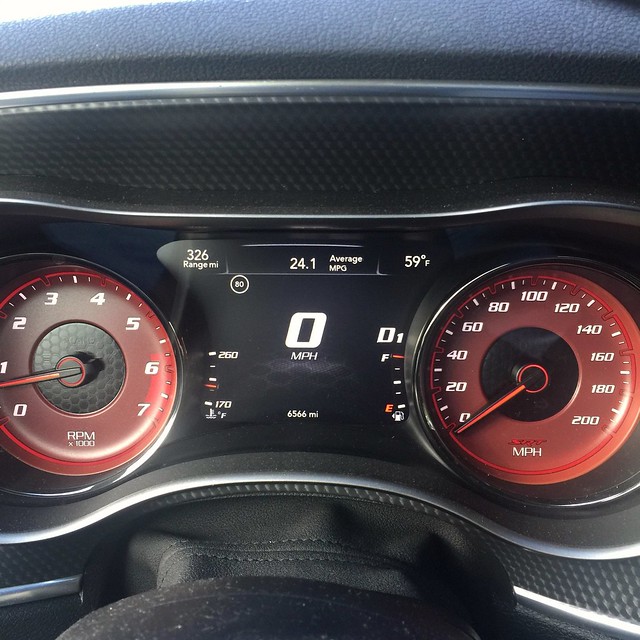 Seats: My car is finished in the optional Sepia Laguna Leather and I have to say that I am super impressed with the quality of the leather. It is incredibly soft and supple but has stood up very well to the use it has seen so far. The leather quality is far beyond what I was expecting from a Dodge especially since all the previous ones I have driven have been base rental models. The seats are also supportive and bolstered enough without being too uncomfortable for daily use. And as a final bonus they have excellent heating and ventilation which is great.. 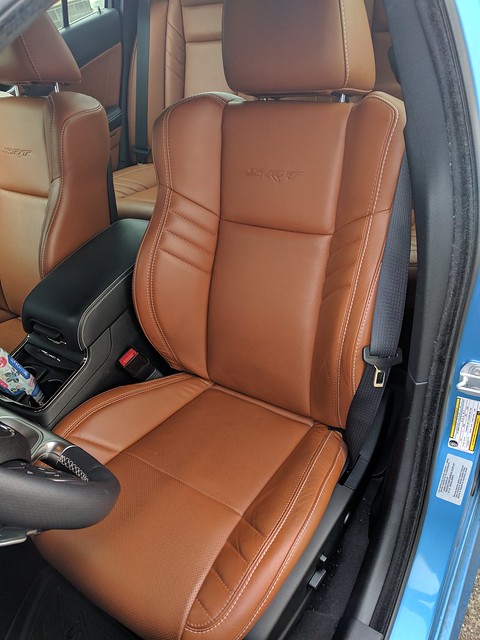 Space and comfort: At roughly the same length and weight as our old Ford Flex, the Charger is a surprisingly large car which results in a large amount of interior space. The seats up front are super spacious and the rear passengers have a good amount of legroom even with front seats set right back (pic below). The street suspension settings are pretty soft and give you excellent ride comfort on long drives. All in all I have to say that the car is a fantastic grand tourer. 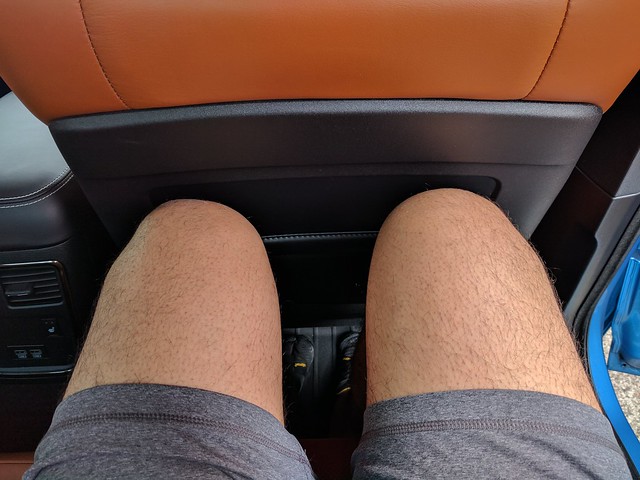 Stealth appearance: The Charger Hellcat is the ultimate sleeper. I love the fact that it looks pretty much identical to the Charger rental cars you can get in any airport. While the B5 Blue does make mine stand out a bit, the average person has no idea that this car can do 200mph. Unlike the Elise and Evora, I dont have people on the highway pacing me to take pics or asking me who makes it at every gas station. 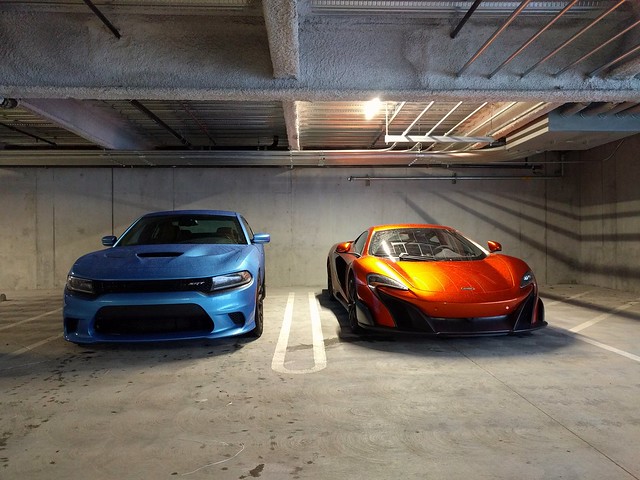 Who would think that the Dodge is the more powerful car in the shot?

Gauges: Another thing I like about the car is the number of interesting gauges you can see while driving the car. The engine gauge below shows the instantaneous power numbers on the car which can be quite fun to try and max out. It also has a number of other gauges line AFR, oil temp, trans temp, intercooler temp, etc.. which are just plain cool to look at in real time. 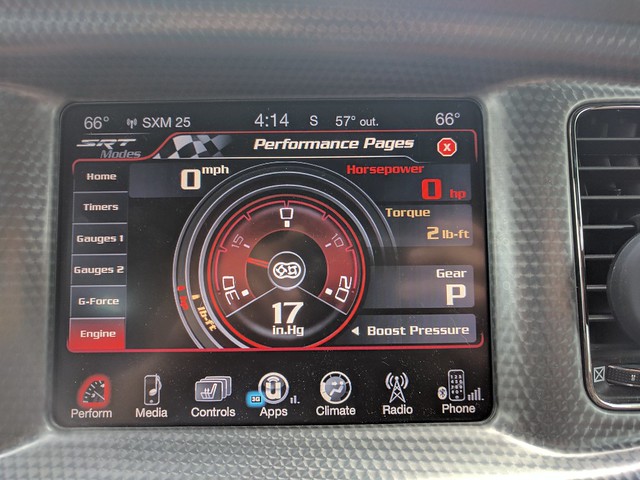 Exhaust: This is love it or hate it item. I love the fact that the car has a quiet exhaust at normal speeds but it opens its active exhausts and makes a healthy racket when you accelerate hard. Its great to be able to relax for most of your commute but still be reminded that you are in something special when you are in the mood for some fun. That said there are plenty of people on the forums who think the car is too quiet and have the active exhaust valves modified to stay open all the time.

Radio Power Switch: The single most frustrating thing about this car is the fact that it does not have a power switch to turn the bloody radio off. Some moron at Dodge decided that people in a 700 hp muscle car will always want to listen to the radio instead of the exhaust that the engineers probably spent man years on tuning correctly. Talk about not knowing your customer.

The only way you can stop the speakers from playing is to turn the volume all the way to zero. In that case the MP3s will still keep displaying on the console and playing in the system but you just wont be able to hear them. Which is again very annoying because I drive without the radio most of the time but when I do listen to it I often cue it up to specific songs and this continuous autoplay literally makes it impossible to do.

Uneven Air Conditioning: While the Hellcat has a very strong AC and Heater, the temperature sensors appear to be pretty flaky when you start driving. On cool days if you set the cabin temp to a little over ambient it blows extremely hot air through the vents for several minutes before it settles down to the correct temp. I am guessing that this is likely due to it trying to rapidly set the air temp for the entire cabing but the fact is that it really does not work and is pretty uncomfortable for the first 3-5 minutes of driving. Thankfully there is no similar issue when cooling the car on hot days.

Traction: The car is severely traction limited on its stock tires and I wish that Dodge had given an option to put some really wide and sticky tires on the car from the start. They have realized this mistake now and the Dodge Demon comes with drag radials from the factory.

Fuel Capacity: One minor annoyance with the car is the relatively short range of the tank. One most tanks I get a range of 275-300 miles which is a litte on the short side for a commuter car. That said I dont think there are too many people that buy a Hellcat as a commuter car so I cant blame them too much.

Driving Dynamics: The one weakness of the car is that the driving dynamics on twisty roads are not very good. The car definitely shows its weight and while the sport and track suspension modes make the ride firmer, I am still not very comfortable pushing the car to the limits. This is however comparing to my various Lotus so it isnt really a fair comparison. I plan on taking it to a track day at some point to see what it feels like closer to the limit – its just too powerful to approach its limits out on the street.

That said I bought this car to serve as a GT commuter car and for that role the dynamics are pretty damn good.

The Charger Hellcat is a very different car that appeals to a very specific type of customer. If you are looking for a sleeper rocket ship that can blow the doors off most any car you will see then this is absolutely the car for you. It does not have the great great interiors and driving dynamics of an M5 or an AMG but at <$65k it is an incredible performance bargain that serves as a wonderful grand tourer. It definitely has its flaws but 707hp compensates for many things and will put a smile on your face every time you hit the gas. I give it two thumbs way up.