One of the concepts I have been toying with is creating a dessert that looks like a savory course but is actually sweet in taste. Since my next fancy meal is going to have “Eggs” as its theme, I decided to try making a new version of Spaghetti Carbonara as that is probably my favourite egg based pasta. The end result is what you see below, Spaghetti Carbonara Dessert with white chocolate spaghetti, candied bacon, crystalline honey, black pepper and lava salt. 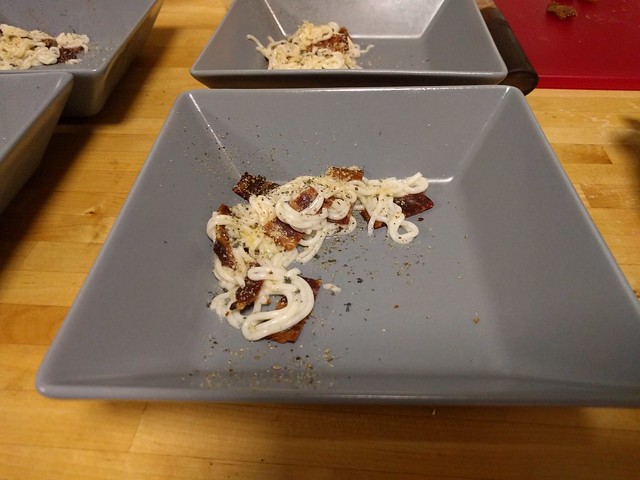 The first step was to make white chocolate spaghetti using the recipe from the Molecule R kit (175ml water, 2g agar agar, 85g white chocolate, boil, extrude). The spaghetti ends up being super easy to make but is also really time consuming to make. It took me over an hour to make enough for those 4 small servings with constant switching of syringes and taking the tubes in and out of the water. The next time I am going to use a longer hose (3-5 foot) coiled through ice water and try continuous extrusion instead. The other things I was concerned about was storage of the spaghetti itself. I originally tries spreading them out on a cookie sheet without touching each other but found that they were hard to pick up and I quickly ran out of space. I then started just extruding them into 4 piles and that made them easier to handle as a single mass and allowed me estimate the serving size a little better. FYI the spaghetti will lose liquid due to syneresis so you want to store them in an intermediate dish and plate just before serving. Plating and holding for an extended period will lead to some unsightly puddles on the plate. 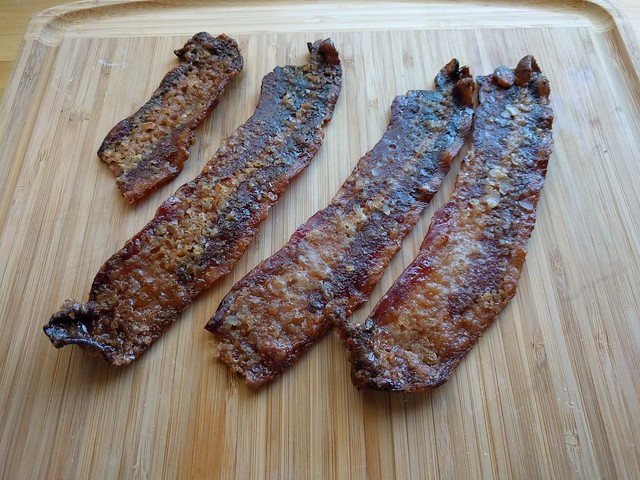 The other main ingredient is candied bacon which is exactly as tasty as it sounds. Its a fairly easy recipe where you start by spreading the individual bacon strips out on a cooling rack set over a foil covered cookie sheet. You then coat the top of the bacon with maple syrup and sprinkle some brown sugar directly on the bacon. You will be tempted to load the bacon up with sugar and I can tell you from experience that too much sugar actually destroys the taste of the dish. I found that adding one generous sprinkle per slice of bacon is about the right amount. And yes I know that everyones hands are different sizes but I did not measure my sprinkles. Once you have added the sugar you can move the cookie sheet into an oven at 350F and bake for 15-25 min based on the thickness of your bacon and the actual oven temperature. The bacon will slowly render the fat off the cooling rack and onto the foil as it cooks. Once the bacon is has browned you can remove it from the oven and let it cool for ten minutes before removing it from the cooling rack. You must keep a close eye on the bacon in the final stages as it is very easy to burn the edges as you wait for the centers to brown. When in doubt remove it early and check as you can always put it back in the oven for a second round of browning.

Plating of the dish is pretty straightforward as long as you have a dark bowl handy. You start by chopping up the candied bacon into small pieces, I find the crispier edges to be my favourite bits but you may also want to use the chewier center sections. You then plate the spaghetti on the bowl and strategically add in the bacon bits by hand. I found it helpful to use tweezers to raise the spaghetti in the middle and then add some bacon in there as well. The next step is to sprinkle some crystalline honey which adds a little flavour and texture but I primarily use it to replicate the parmesan you expect on the carbonara. Finish with some black pepper and black lava salt but be very sparing with the pepper as it can quickly overpower the dish. I do however like the pepper as it adds some heat to what would otherwise be a very very sweet dish. The crystalline honey

All in all this was a pretty successful dish for a first attempt. The next time I will make a lot more spaghetti and be more restrained with the pepper. I might also try adding some milk/cream to the dish to make it look creamy/saucy like a savory carbonara.

[…] Spaghetti Carbonara dessert consisting of white chocolate spaghetti and candied bacon. The one change I made was to […]

[…] breakfast looking combination changed to be a sweet dessert. The bacon is candied bacon from the spaghetti carbonara dessert while the egg is similar to eggs benedict dessert but in this case the egg white is made from white […]