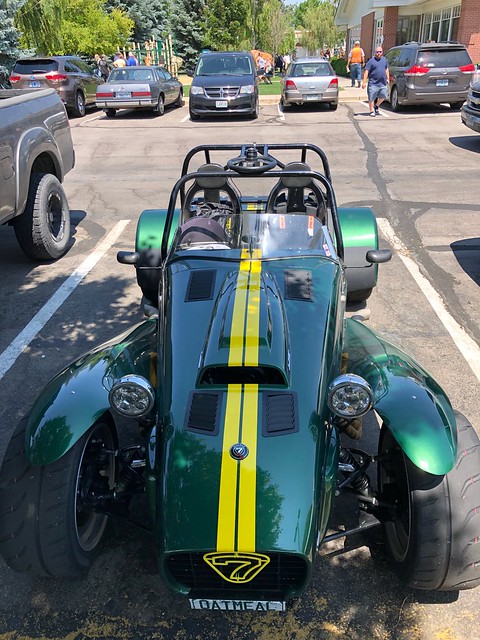 I am happy to announce that I am the new caretaker of this wonderful V8 Stalker and am back in the Seven life. When I sold my Ultralite a few years ago, I didn’t really miss it too much since I had my Elise as a track car. But then I went to Spa with some Sevens and remembered just how much fun they are on track. I decided that I would have buy another one at some point and ideally do either a bike engined Caterham or V8 Stalker to try out a different style of Seven. I wasnt actively looking but when the builder of this car poseted that he was thinking of selling it I was intrigued. It is one of the last Stalkers built with original (non M-spec) chassis design and this one is powered by a 430 hp LS3 engine. The biggest thing about it though was the builder himself – he had spent years perfecting this car as a money no object build and with 10k miles it was pretty well debugged as well. I called him up and struck a deal contingent on me seeing it and actually fitting in the car.I flew out to Denver last Saturday and was happy to see that the car was indeed as perfect as it looked in the pics. I am a bit of a tight fit but that can be remedied by moving the steering wheel a bit to get some additional leg room. We consummated the deal and I then set off on a 1250 mile drive back to SF. 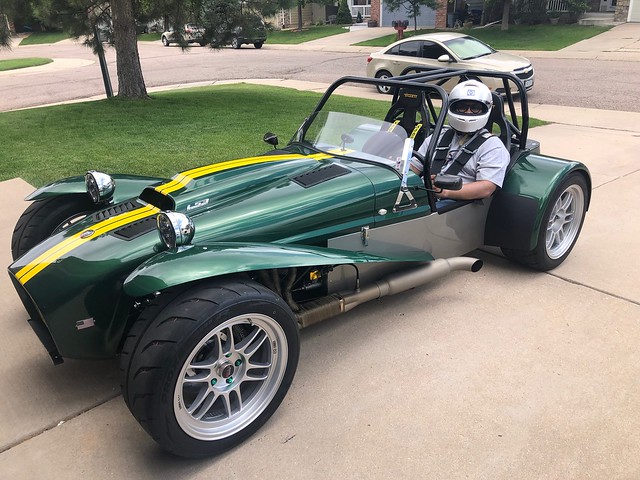 On day 1 there was a risk of showers in the evening so my plan was to leave early and drive to Laramie, WY to spend the night. I made some great time and only got only a few spots of rain that I was able to drive through. The car drove well on the highway and was quite a bit softer to drive that the Ultralite. 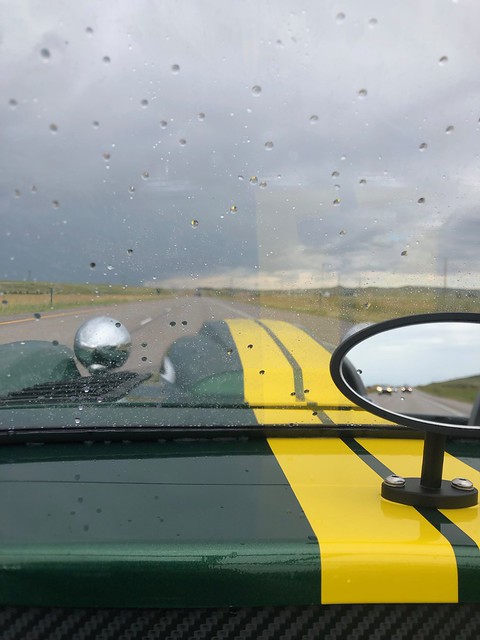 Apart from my driving shoe splitting apart I was in good shape and so I decided to continue on to Rawlings, WY instead. 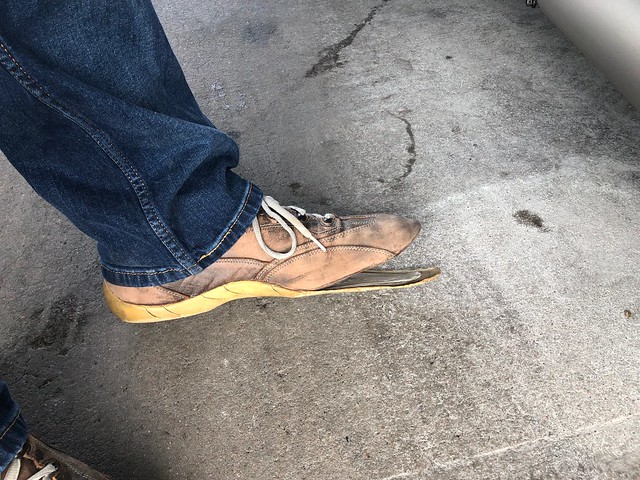 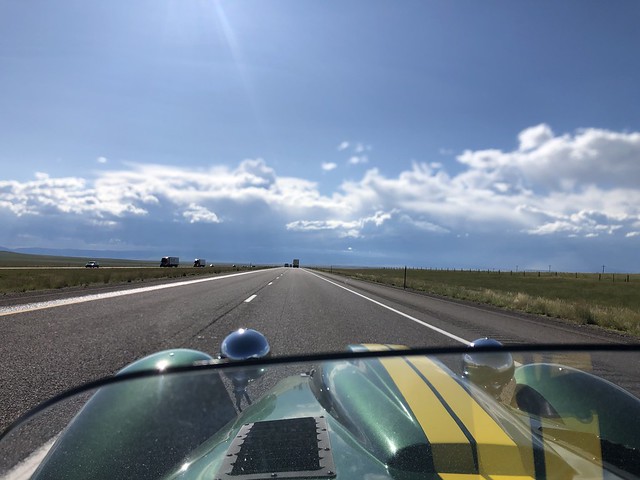 While I started out with great weather from Laramie, the sky suddenly turned ominous and started bucketing down with heavy rain. 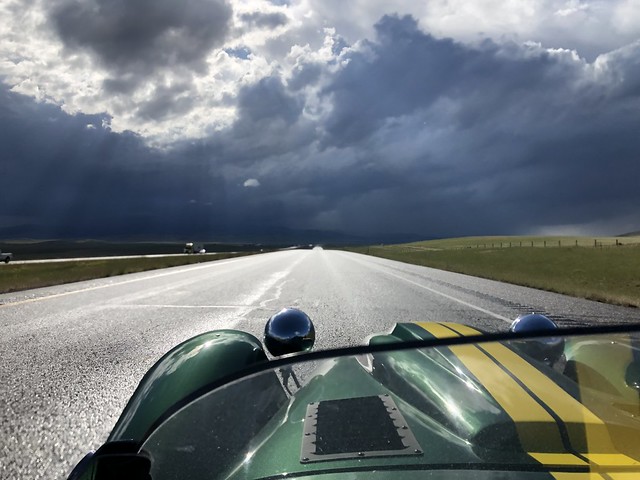 The raindrops were large enough to actually hurt when they hit my fingers as I was not wearing gloves at the time. I was driving with my helmet on but the visibility was so bad that a lot of the traffic started slowing way down from the 80mph speed limit. I brought it down to about 40 mph myself and desperately started looking for an exit. Luckily the next exit (about 5 miles away) was a rest area and I was able to pull off the road and find some shelter. 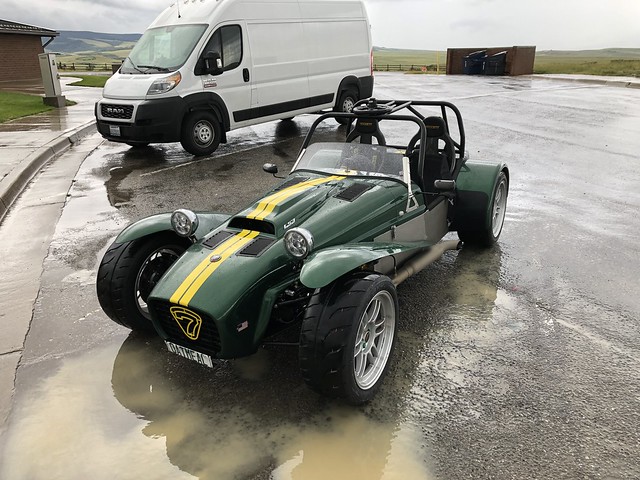 Before stopping I did have the particularly fun sensation of feeling water sloshing around the seat and literally splashing up my back whenever I hit a bump. It ends up that the really nice Tillet Carbon seats will very quickly become bathtubs in the rain and will force water up the seatback when you lean back. I waited out the rain, scooped out as much water as I could and had mostly dry weather till I got to the hotel in Rawlings, WY. 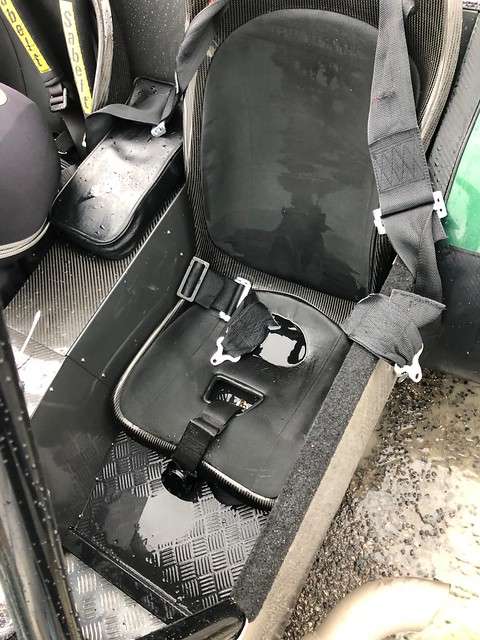 As an aside, people who say that Sevens are impractical just don’t know how to pack. This is all the stuff I had along with me as I unloaded the car at the hotel. 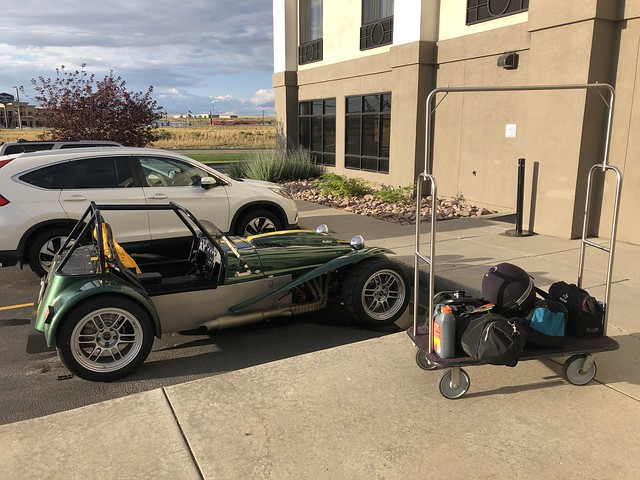 Day 2 got off to a late start which meant the temperature was almost at 80F as I got started. The first ~150 miles were pretty comfortable and I made it to the Utah border before stopping for lunch. The day had been going well and I started thinking about going further than the 400 miles I had planned for the day. 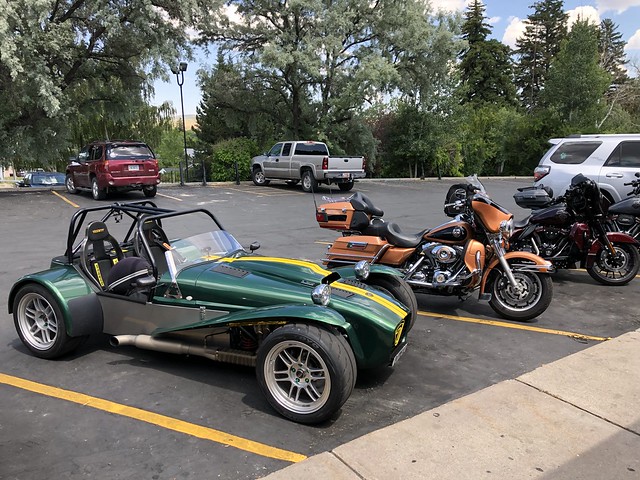 Unfortunately once I entered Utah the temperatures went into the mid-90s which really sucks in a Seven. The car was running great but I really started to suffer in the car. The view as I went past the Bonneville Salt Flats was pretty cool but in the end I has to call it quits at the 400 mile mark and just made it past the Utah-Nevada border.

I was super tired from the heat and spent the night chilling at a casino in West Wendover. It was a good time to have a steak with a few drinks and get a full nights rest. One interesting thing about West Wendover is that though it is part of Nevada it still follows Mountain time instead of PST like the rest of Nevada. In fact there is a sign some 10 miles west of the town that marks the beginning of Pacific time. 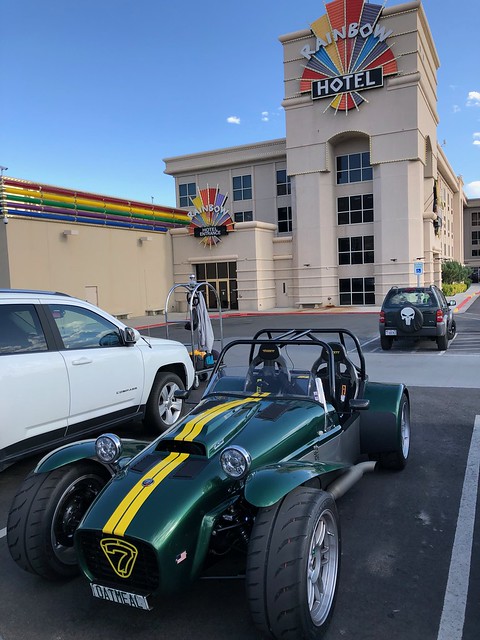 I thought that day 2 was bad but day 3 was much worse as it was a dash across Nevada in 95F weather. I didnt bother taking any pics or video – I just wanted to make it to Reno in time for some more drinks. While I did make it to Reno in time, there was some sort of teachers conference that booked 900 rooms which meant I had to wander around town and go to 3 different hotels before I could find a room. As you can imagine, having to unpack and get out of the car 3 different times after 6+ hours in the heat meant that I was not a happy camper. In the end I did find a room and was even able to park the car under some shade. 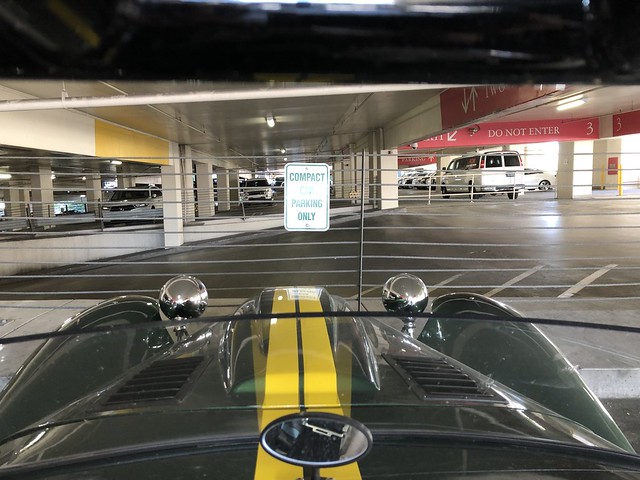 I got some excellent proof of just how many bugs were hitting my helmet despite the stalker having a windshield. All the bug stained teeth jokes about Seven owners are apt. 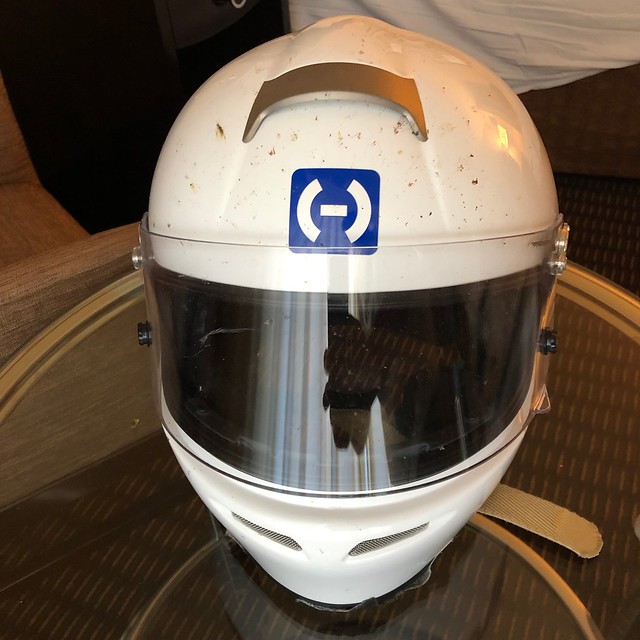 Day 4 was a quick 250 mile blast from Reno to SF and I was able to make some excellent time. In fact the only slow down was due to an accident on the Bay Bridge but with the cooler weather it was pretty comfortable to do.

I got home and parked the car up. My Viper was not happy about giving up the garage space and is probably plotting to kill me 🙂 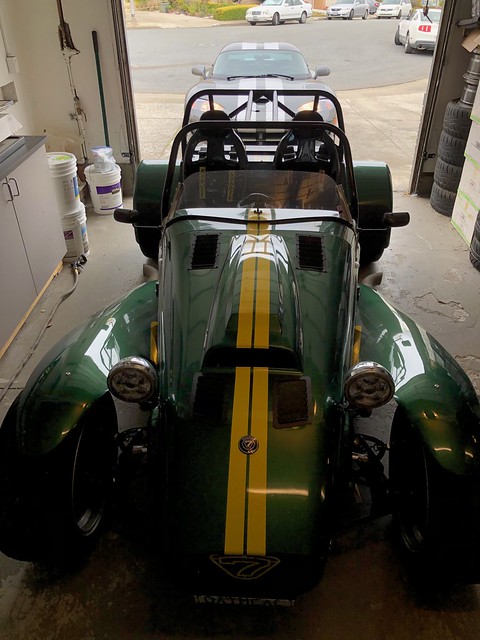 2 replies on “Back in a Seven”

Wow, nice new addition to your garage! I stumbled onto your site when I was contemplating a WCM (own a modified S2000 presently). Most Stalkers do not appeal to me but that appears to be quite a impressive spec. Live rear axle? Love the site.

Thanks Reid. It is one of the last original spec cars built by Stalker and has a live rear axle. The later ones are what they call M-Spec and have IRS with pushrod based inboard shocks. I highly recommend the Stalker – it is a few hundred pounds heavier than the Ultralite but an extra 200 hp means it is much much faster. Also it is much easier to get parts for an LS motor compared to the F20/F22 where Honda no longer makes new blocks.